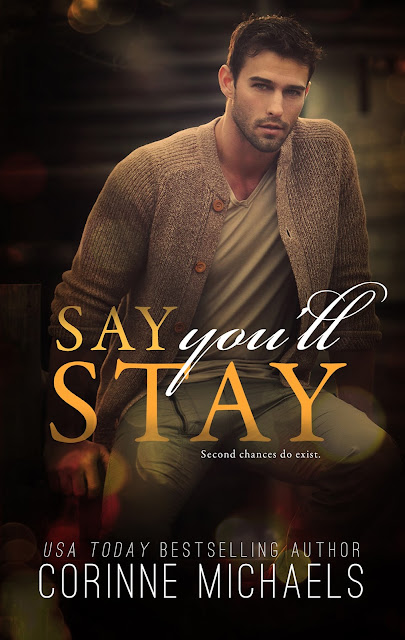 It was all he had to do. Instead, he got on that bus and took my heart with him.

That was seventeen years ago.

I moved on. Marriage. Kids. White picket fence. Everything I ever wanted, but my husband betrayed me and I was left once again.

Alone, penniless, and with two boys, I had no choice but to return to Tennessee. He wasn’t supposed to be there. I should’ve been safe. However, fate has a way of stepping in.

This time around, the tables are turned. It’s my decision. Second chances do exist, but I don’t know if we can repair what’s already been broken . . .

A knock on my office door causes me to stop working. “Zach?” I push my glasses up the bridge of my nose and stand. I should’ve known avoiding him wasn’t really going to work when he can roll up any ol’ time he wants. It was only a matter of time.
“Sorry to stop by without callin’, but the other night wasn’t exactly the best place for us to talk.” He removes his hat and tosses it on the chair. “I saw you in town yesterday trying to be incognito. Figured we should try to be civil.”
Civil? He can’t just show his face when he wants. He doesn’t belong here. I don’t want to see him at all, much less in my home, the one place that’s my safe haven. Damn him for not taking the fucking hint.
“Your mother said you were out here. She didn’t throw something at me, so I took that as a good sign.”
“What are you doing here?” I stand, slamming my hand on the desk. “My mother may not have thrown anything because she’s a proper Southern woman, but I’m not anymore. I’ve spent enough time in the North to not give a shit if I pelt you in the head with a stapler!” I grab it off the desk and rear back.
“Whoa! Whoa!” he says with his hands raised. “I’m not coming to start anything. I just want to see how you are. I’ve missed you.”
“Asshole!” I throw the stapler at his head. “You don’t get to miss me!”
He ducks as it makes a loud bang against the wall. Zach’s eyes widen as his lips turn up. “Seems all those years watching me play ball taught you how to throw.”
I grab the next thing I see. “You apparently sucked at teaching!”
“Felicia and I wanted to invite you over for dinner.”
He has lost his damn mind.
Zach lets out a sigh and moves closer. “I know it could be awkward, but I figured if . . .”
“If what? That there’s a chance we could be friends? Hang out even? You need your head examined if you think that’ll happen.” I don’t know if maybe he forgot how we ended things.
“Pres,” he chides.
“Don’t ‘Pres’ me! You have some nerve showing up here.”
“It was a long time ago.” I want to sock him in the face.
“Leave,” I demand.
Zach walks closer and crosses his arms across his chest.
“I’m not leaving until we settle this. I want us to get things out in the air.”
“Fine.” I grab the paper clip holder and toss it. I miss again. “That was in the air.”

Corinne Michaels is the USA Today and Wall Street Journal Bestselling author of The Salvation Series (Beloved, Beholden, Consolation, Conviction & Defenseless). She's an emotional, witty, sarcastic, and fun loving mom of two beautiful children. Corinne is happily married to the man of her dreams and is a former Navy wife. After spending months away from her husband while he was deployed, reading and writing was her escape from the loneliness.

Both her maternal and paternal grandmothers were librarians, which only intensified her love of reading. After years of writing short stories, she couldn't ignore the call to finish her debut novel, Beloved. Her alpha heroes are broken, beautiful, and will steal your heart.