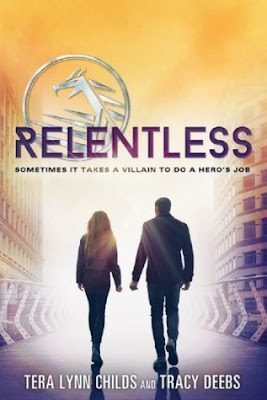 Revenge is easy, but justice is worth fighting for…

Kenna is tired of being lied to—and hunted by the very allies she once trusted. Unearthing the dark secrets of the superhero world has not only endangered her life, now her boyfriend faces execution for crimes he didn’t commit and her mother is being held captive in a secret governmental prison.

But the truth is even more terrifying than Kenna could imagine. A conspiracy threatens the fate of heroes, villains, and all of humanity. If Kenna’s going to survive, she must draw on her deepest strength: her resilience. Because when Kenna’s pushed to the limit, she doesn’t break down. She fights back.

I read the first book in this series, Powerless , which I liked. I didn't love it, but I was still interested in seeing what would happen in the next book. I am glad I decided to continue with this series because I ended up liking this book a lot! I thought this book was a lot better than Powerless .This book picked up right where the last one left off and it started off with a bang! From the first page, this book was action packed. I was constantly on the edge of my seat. Most of the scenes felt like they were straight out of a super hero movie.

I thought the plot of this book was interesting and the writing flowed well. The dialogue felt believable for teenagers. Some of the drama within some relationship were a bit eye-roll worthy. Thankfully, most of those issues were solved pretty quickly. I felt like this book focused more on the plot/action instead of drama. I really appreciated that! The romances were cute and swoon worthy. I liked seeing the couples develop more through out this book. The romances still feel a little like insta-love, but I was able to look past that because the romance wasn't the main focus of the story. I enjoyed the romance more in this book than in the previous book. I really liked all of the characters in this book. I thought they were all unique and lovable in their own way. I thought the authors did a great job at developing all the characters and making them feel realistic.Kenna really stepped up in this book, and it was awesome. Kenna embraced her powers and became a bad ass leader. I loved seeing her take charge. She was understanding, kind, and tough. She made a great leader for the group!