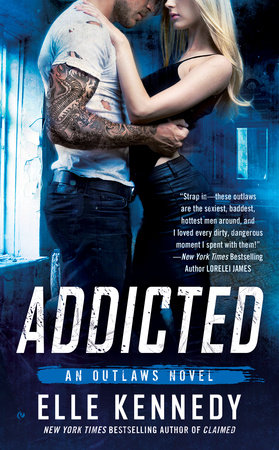 
Lennox used to live in a paradise on earth with his best friend Jamie, in a place where visitors came and went, allowing their desires to run free. But everything changes when a deadly attack forces them to take up with Connor Mackenzie’s band of Outlaws. Lennox knows Jamie is hung up on someone else, but he’s always believed he’s the man for her—and won’t let her go without a fight.

Even though Jamie is well aware that Lennox is one hot specimen of a man, she refuses to let sex ruin the most important relationship in her life. But when the object of her interest spurns her, she indulges in a little pleasure-filled revenge with her very magnetic, very willing best friend. One thrilling night with Lennox is enough to awaken Jamie’s unexpected desires for him. And now that she’s had a taste, she’s not sure she can ever give him up...

I’m now completely addicted to the Outlaw series by Elle Kennedy. The second novel in the series ADDICTED proves that Elle Kennedy is an imaginative storyteller and can create heart stopping, chemistry ridden stories that leave you turning the pages as quickly as you can.

After a deadly attack forces Lennox and his best friend Jamie to leave their home and relocate with Connor Mackenzie and his band of outlaws (which is described in greater detail in the first book, CLAIMED, so go read it :) ), everything between Lennox and Jamie has been unpredictable.

The two have been friends since childhood but have never made any indication that their relationship was anything but platonic. When they are sent to another compound to help with a situation there, their true feelings start becoming clear. They are both afraid to ruin their friendship, and loving someone in their world can only lead to heartache.

“Every move I make is directly driven by my feelings for you.” His fingers tightening in her hair, his chest pressed right up against hers, a solid, immovable object. “When I make a decision, you think it’s my safety I take into consideration? It’s fu***** yours. I don’t take a g****** breath without considering how it would affect you.”

I met Jamie and Lennox in CLAIMED and while they were only secondary characters Elle Kennedy’s writing had me hoping that they would soon get their own story. And let me tell you, their story does not disappoint. ADDICTED had the kicka**, complex characters that I grew to love. Jamie is a fierce, independent woman with a vulnerable side that makes her the perfect match for Lennox. And who wouldn’t love Lennox, a hot alpha with a temper that makes Jamie show her claws? I loved this book and I’m dying for the next installment. I hope all the characters get their own story, because there is a lot I need to know about everyone!