The Binding by Nicholas Wolff 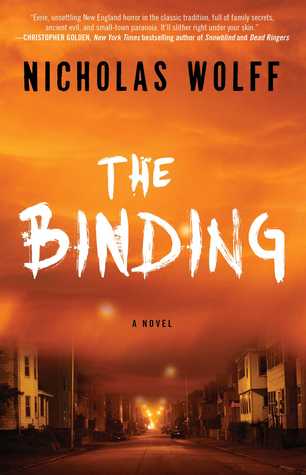 When a rare mental disorder begins to consume his small-town neighbors, a young psychiatrist digs up the past for clues to the epidemic’s bone-chilling source in this brilliant supernatural horror debut, written in the bestselling tradition of Peter Straub.

Convinced that evil spirits have overtaken his daughter, a desperate father introduces her to Nat Thayer, a young psychiatrist in their sleepy blue-blooded Massachusetts college town. Thayer quickly diagnoses the girl with Cotard Delusion, an obscure condition sometimes described as “walking corpse syndrome.” But Thayer soon realizes his patient—and many of the local families—are actually being targeted by a malignant force resurrected from the town's wicked history. Thayer must discover the source of the spreading plague…before there is no one left to save.

The binding was scary at times. If I'm honest, I had to stop reading it after the first few chapters since I was home alone. I decided to read it during the day instead.
Can you blame me? A dark power is among the town and people are dying but they might not be dead after all!!

The Binding is a tale of horror with compelling characters and paranormal situations. The main characters kept me guessing. I was trying to discover who was behind the killings.

Nat Thayer is a young psychiatrist who gets involved in a new case when a man comes looking for help with his daughter Becca. Becca believes herself to be dead and in the body of someone else. Nat is fascinated with her once he realizes she is suffering from Cotard Delusion, also named Walking Corpse Syndrome. But, what if the girl is not mistaken and she is telling the truth?
Yes, that's the real question.

The other plot line comes from the sheriff John and his young son Charlie. John can't believe what's happening in his town but he needs to put a stop to it. He feels that this is very important to him and his son.

Following these two characters trying to piece the past and current events was fun. I won't reveal much of the story but I can say it was  quite engaging.

I do wish that the book had a little more detail with the ending. I still have some questions I didn't feel were answered.