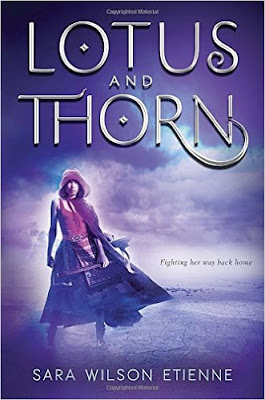 Ravaged by a plague known as Red Death, the planet Gabriel, a former colony of Earth, is a barren wasteland. Since being abandoned by Earth 500 years ago, resources are scarce and life is cheap. To stay alive, the survivors, the Citizens, scavenge the remains of a now dead city, trading for food with the resource-rich Curadores, the only other survivors on Gabriel. Every old computer, every piece of wire, every scrap of metal counts. To steal is the ultimate sin. So when tough-as-nails seventeen-year-old Leica is caught doing just that, she's exiled and left to the mercy of Gabriel's unforgiving desert for the rest of her life.

While in exile, Leica discovers a mysterious shuttle, which may not only lead her home, but even more impossible—reestablish contact with Earth. Then Red Death rears its head again, killing her entire work crew, leaving Leica all alone until a handsome Curador offers her refuge in the Dome—the only place on Gabriel untouched by Red Death, where a decadent and sultry life awaits. But there's a catch: Leica can only enter the Dome as his concubine—his Kisaeng. When a rogue group of Citizens see their chance for revolution in Leica's good fortune, she finds herself unraveling a deadly mystery with chilling answers to the true origin of Red Death and the reason Earth really abandoned them so long ago.

A richly imagined fantasy in the vein of Tamora Pierce, Lotus and Thorn, is a magnificent, epic adventure.

I didn't know what to expect from this book, and I ended up really enjoying it! I will say that this book was on the long side, which I thought was a little unnecessary. I definitely think it could have been a tad shorter, however, I still liked it. The world that the author created in this book was very unique and interesting. Overall, I thought Etienne did a good job with her world building. There were a few times where I felt like things could have been explained a tiny bit more more, but the world building was solid as a whole. I thought Etienne did a great job at creating a world that was extremely unique and memorable. Some parts of the book felt slow, which is why I said I thought the book could have been shorter. However, most of this book was action packed and a lot of fun. I had a hard time putting down this book! There were a few moments that felt a little all over the place, but I was able to look past those moments because they were minor. The romance in this book wasn't really a typical "romance". At least, not in my opinion. I don't want to spoil anything, so all I will say is that the romance seemed to be more physical than emotional. I do think there could have been more emotional development in the romance department. However, I still found myself liking that aspect of the book. Etienne did a great job at creating some very steamy moments. The few steamy/swoony moments in this book were to die for. I liked a lot of the characters in this book. I thought they were all interesting characters. My favorite character was the main character, Leica. I loved how loyal and strong Leica was. I really liked the fact that she was a good fighter and extremely smart. Leica was very skilled with electronics, which I found so interesting. I loved how there was more to her than just being good at fighting!Overall, I thought this was a unique and intriguing book. There were a few things I didn't like, but as a whole, I enjoyed this book! I would recommend this book to anyone look for a sci-fi/dystopian YA novel.

4 / 5 Fangs* This book was given to me in exchange for a honest review.*
Posted by MissDaemon at 8:30 AM