A Measure of Love by Sophie Jackson 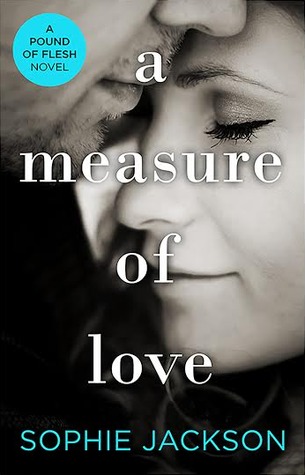 From award-winning fanfic phenomenon Sophie Jackson, the third novel in the sexy and emotionally intense blockbuster A Pound of Flesh series.

Life in New York for ex-con Riley Moore is pretty damn good, until a call from his mother shatters the calm: his father has suffered his second heart attack in two years and is in a critical condition. Leaving everything behind, Riley flies home to Michigan for the first time in five years to support his mother and do his best to make amends with his father. He also tries not to think about Lexie Pierce, the only girl he ever truly cared about, and who broke his heart.

When they inevitably meet, memories of their love make Riley yearn to reconnect, despite the pain they both suffered. Though she's wary, and has a secret she’s hidden from him for five years, Lexie has little willpower when it comes to Riley and she agrees. Besides, after all that has gone before, she owes it to both of them to find out if they can love each other again.

Can they both overcome their sorrow and secrets and finally share their life together?

A powerful new voice in modern romance, Sophie Jackson has crafted a passionate love story with unforgettable characters that will stay with you long after you’ve turned the last page.

A Measure of Love centers on Riley and Lexie's love story.

Riley Moore is going back home after five years. His dad has suffered a second heart attack and Riley knows he can't avoid him any longer. His dad is still upset after Riley was found guilty and spent time in jail.

Riley has only loved one girl since he was a kid. He was devastated when things didn't work out for them but he has tried not to think about Lexie any longer.

Lexie has moved forward in her life. She has a successful business and she can count on the support from her family. She suffered a great loss when her father died and then saying goodbye to Riley broke her. Currently, she is in a much better place. But, when she sees Riley, she knows she has to make amends for pushing him away and the secrets she kept for too long.

I have to say that I'm a little disappointed. The main reason was that even though, she hid something important from him, everyone wanted her to grovel for his love. They wanted her to apologize for her "mistake" over and over again while she kept on claiming that it felt like the right decision for her at that time. I don't know, I guess it rubbed me the wrong way. She was a nice girl that had a lot on her plate and Riley had plenty of fun with too many women.

Now, to the positives... I liked his family. The brothers all seem to have a close relationship between each other. They like to tease each other and their banter had me smiling quite often. His relationship with his dad felt very real to me and I think their conflict was handled the right way.

I love Noah. He was a great little guy and his addiction with Superheroes was too cute.

I also liked Lexie's sister and mother. They were willing to pitch in to help her and Noah.