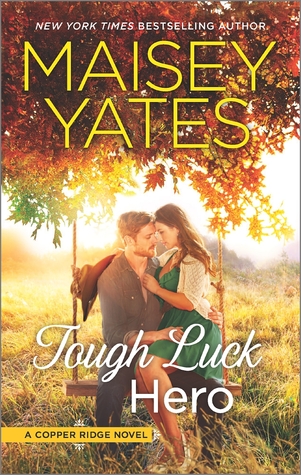 Can the golden boy of Copper Ridge, Oregon, get a second chance at happy-ever-after?

Ranching heir Colton West knew his wedding would be the talk of the town. But he didn't expect to get left at the altar—or to escape on the next flight to Vegas with Lydia Carpenter, the woman who gets under his skin like no one else. The only thing crazier than honeymooning with Lydia is waking up married to her. So why does he find himself entertaining his new wife's desire to stay married—and fantasizing about a real wedding night?

As Copper Ridge's prospective mayor, Lydia can't risk a divorce scandal so close to election time. But pretending to be blissfully in love with her new husband is more confusing than she'd thought. For a man who's always rubbed her the wrong way, Colton suddenly seems to know exactly what to do with his hands. And his lips. Now Lydia's wildest mistake could turn out to be her luckiest move, if they're both willing to take the ultimate gamble…

I have read a few books in the Cooper Ridge series and I've always liked them but after reading Tough Luck Hero, I know this one is my favorite.

So what happens when you mix two type A, strong, determined people who seem to hate each other?

Lydia Carpenter is running for Mayor of Cooper Ridge. She loves this town and she wants to preserve its qualities but also to make it successful. She wants to win and help the people who have helped her after moving into town a few years back.

From the moment Lydia met Colton West, she knew she had to remain as far as possible from him. He was dating her ex-best friend Natalie and she's even a bridesmaid at their wedding. But, when said wedding doesn't happen and Colton is left at the altar, she can't seem to let him suffer. After too many drinks, the next morning she finds herself with a severe hangover in Las Vegas with a ring on her finger. Yes, she has married the guy she was supposed to stay away from. Annulling the wedding is not an option. The last thing she needs is this type of news to spread around town. Nonetheless, she's not sure she can survive moving in with Colton. She's attracted to him and as hard as she tries to fight her feelings for him, getting to know him only makes it harder.

“But I really don’t do things like this. I am not spontaneous. I am not irresponsible. I do not…sleep with men that I don’t like.”
He snorted. “I don’t usually sleep with women with superiority complexes.”

Colton has always done the responsible thing. When his twin left town without a glance back, he knew he had to step up and help his father with their family business. He has demonstrated he's good at it. He's also good at helping his sisters and mother who is fragile after learning her father had an affair and he has another sibling. He decides staying married is the best choice rather than upsetting his mother and fighting his attraction to Lydia is a lost battle. Convincing her that they might have a chance is harder than he thought. Good thing he can be stubborn.

“Next to him I look like a damn Care Bear.”
She pressed her hand to his stomach and pushed against his abs. “Aren’t you supposed to have some kind of rainbow light that shoots out of you or something?”
“I regret my choice of simile. Stop pressing on my stomach.”
“It pretty much doesn’t press. Your abs are crazy.”

I loved both characters. They made perfect sense. From the moment they met, they knew about their attraction. Their banter and fights had me laughing every single time. The epilogue was too sweet!