Today we are bringing you the first look inside Kendall Ryan's upcoming book HITCHED! 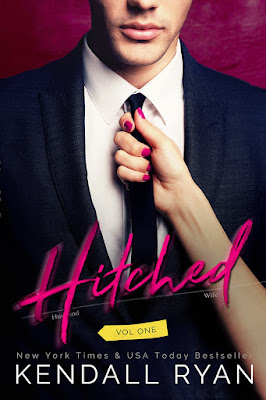 Marry the girl I’ve had a crush on my whole life? Check. Inherit a hundred-billion-dollar company? Check. Produce an heir… Wait, what? I have ninety days to knock up my brand-new fake wife. There’s only one problem—she hates my guts. And in the fine print of the contract? The requirement that we produce an heir. She can’t stand to be in the same room with me. Says she’ll never be in my bed. But I’ve never backed down from a challenge and I’m not about to start now. Mark my words—I’ll have her begging for me, and it won’t take ninety days.   On the heels of her smash hit and New York Times bestselling SCREWED series, Kendall Ryan brings you HITCHED, a romantic comedy that delivers heart and heat. A NYC playboy turned business mogul has ninety days to win over the woman he's always desired in order to save his father's company. One tiny problem: She hates his guts.

I give him a skeptical look. “You want to show me your dick?”

“If it’ll help convince you.” He drains the last drops of his Scotch and stands up. “Come on, let’s go.”

I stare after him as he walks away.

Is he serious? He’s just going to whip it out? I look around to see if anyone is watching me, then I get up and follow him to the bar’s back hallway, near the restrooms, unable to comprehend why the hell I’m humoring him. This is ridiculous.

Once we’re safely in a private corner, Noah undoes his belt, opens his fly . . . and pulls out a fucking fire hose.

Holy mother of God. My hands fly to my mouth. I want to gasp in shock, but there’s no way I’m giving him the upper hand.

He was right. His cock is nothing short of massive, and it’s not even fully erect right now. Nine inches may actually be a conservative estimate of what it might look like hard. He must destroy men’s egos every time he walks into a locker room. And I don’t even want to think about what he destroys with women . . .

“Meh. I’ve seen bigger,” I force out, fighting to maintain my composure.

“Well, th-that monster is not coming anywhere near my uterus. No, thank you. I prefer to keep my organs intact.”

Noah’s grin widens. “I doubt that, but just to be on the safe side, I’ll ease it in nice and slow. Piece of cake. Plus, you’ve got good health insurance, right?”

“That is not funny, Noah. Now, put that thing away or I’ll remove it.”

I try to sound stern, but my shaking voice and bright red cheeks surely give me away. Why the hell can’t I stop staring?

He chuckles—yeah, the jerk can definitely see right through me—but he obliges, tucking the beast back into its lair.

A New York Times, Wall Street Journal, and USA Today bestselling author of more than a dozen titles, Kendall Ryan has sold over 1.5 million books and her books have been translated into several languages in countries around the world. She's a traditionally published author with Simon & Schuster and Harper Collins UK, as well as an independently published author. Since she first began self-publishing in 2012, she's appeared at #1 on Barnes & Noble and iBooks charts around the world. Her books have also appeared on the New York Times and USA Today bestseller lists more than three dozen times. Ryan has been featured in such publications as USA Today, Newsweek, and InTouch Magazine.

Visit her at: www.kendallryanbooks.com for the latest book news, and fun extras