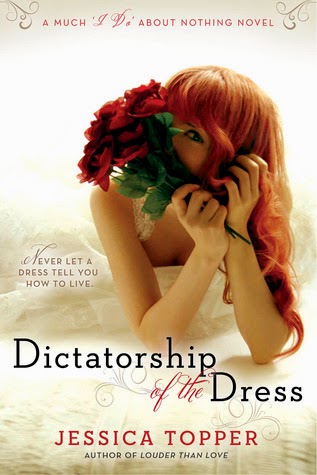 Dictatorship of the Dress

Laney Hudson is dreading her flight to Hawaii. Her mother is getting married again and she's the one responsible to bring the wedding dress with her.
Noah Ridgewood is in route to Las Vegas to meet his Bachelor party. He's not sure if the feelings he's having are related to cold feet or his fiancée is the cold one.
By chance, Laney and Noah sit together and soon everyone thinks they are the engaged couple to be married. To stay in first class, Laney rolls with the lie.
This is a perfect example of first impressions being very wrong since both assumed wrong things about each other. Luckily, thanks to a storm and getting stranded in Chicago they are going to be able to uncover the real truths.

I was a little disappointed with the time frame of the love story. In less than one week they are already in love. I would've love to see them over time fall in love. I'm just not an insta-love lover.
Saying this, I still enjoyed the book. I thought they were both interesting characters. It had humor and the secondary characters gave more depth to the story, I just wish I had liked it more than I did.

“Marriage isn’t just about sticking around for the pretty light show and water features. You’ve got to be there for the dry season, too.”

I ADORED this story. It was a cute and quirky reminder to following your heart and find what makes you happy. With an alternating POV and a mix of memories, the author made me fall hard for ALL of these characters.

Laney Jane has let her mother dictate most of the decisions in her life, out of fear of disappointing her.  She's living with regret, anger and feeling lost after the death of her high-school sweetheart and drummer extraordinaire, Allen.  Taking off his class ring or even thinking about moving on has been difficult, if not impossible.

Laney has been tasked with schlepping her mom's wedding dress from New York to Hawaii for the big day.  The large garment bag she's toting, gets her a bump up to first class, putting her in the seat next to 'tech-boy', Noah.

Noah has his own issues.  He's headed to Las Vegas for his bachelor party weekend and hoping the time away will clear his head. Things with his bride-to-be, Sloane, just don't feel right.

"I'm afraid to hurt anyone. I'm afraid of what people will think."

What neither of them expected was getting stranded in Chicago, together.  With only one hotel room available, Laney and Noah end up spending the night getting to know one another. It's incredibly cute watching them find exactly what they've both been missing.  Noah is so darn sweet.

"You're the best layover I've ever had."

With the story taking place over a 48 hour time period, it could have easily turned into insta-love.  Believe me when I say, I HATE insta-love and that's not what this felt like at all.  It was about two people sharing a connection and the possibility of them exploring a future together. I loved the author's voice and felt the flow of the story was perfect.  Like a great movie playing out in my mind.  I seriously can't wait to get my hands on Dani's book.  Since she's Laney's best friend, I'm hoping we get to see more of her and Noah.

"I brought them all here as my witnesses - I'm not asking you to marry me just yet, Laney. But promise me you'll lay over with me somewhere, sometime soon?"

*Complimentary copy provided by the publisher via NetGalley in exchange for an honest review*
Posted by MrsLeif at 12:16 PM

Email ThisBlogThis!Share to TwitterShare to FacebookShare to Pinterest
Labels: Review comic book artist, Dictatorship of the Dress, Jessica Topper, Laney Hudson, Much "I Do" About Nothing, Noah Ridgewood, software designer