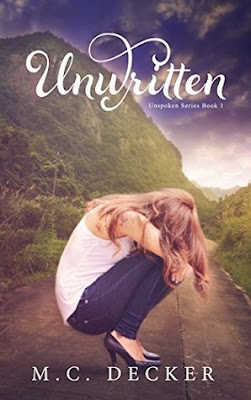 Synopsis:
I thought it was too late. I thought our story had already been written.

College sophomore Brooke Anderson thought she had it all − a loving family, her sexy high school sweetheart, a supportive, quick-witted best friend and dreams of being the next hotshot reporter for the Washington Post.

Fate had something else in mind when Brooke collided with the devastatingly handsome upperclassman, Rich Davis. Rich was cocky, conceited and arrogant.  He was everything that Brooke didn’t want, but Rich never gave her the option. He had already made the choice to be, at the very least, her friend. Would Brooke accept this egotistical man’s friendship? Would she choose to want more? Would it be too late if she did?

Fast forward nearly ten years. Brooke’s life hadn’t played out quite as she had envisioned it. She was suffering from the heartbreaking loss of her mother, her high school sweetheart was long gone, and her dreams of the Washington Post had turned into a career at a small town paper. Brooke decided it was time to follow her dreams. If she couldn’t be happy in love, at least she could be happy in life.

Brooke’s dreams brought her to the lobby of the Washington Post where fate intervened once again as she collided with none other than the devastatingly handsome Rich Davis. As her potential employer, Rich now seemed off-limits. Brooke wanted her successful career more than a chance at love. But, was it really her choice to make, or was it beyond her control?

Maybe my story is, in fact, Unwritten …


Excerpt:
We spent the morning, once again, interviewing some of Rich’s contacts at the Exchange. It started snowing just as we were exiting the building for lunch. I pulled my red, wool peacoat tighter to my chest and wrapped my knitted, white, infinity scarf closer to my neck. I was glad that I chose my knee-high boots rather than the black pumps I had originally unpacked this morning.

“Why don’t we skip our afternoon appointments and play hooky this afternoon,” Rich said. “I have the perfect idea.”

“Shockingly, I did,” he answered amusingly.

“You’ve come a long way since you referred to me as the ‘slacker-type.’”

“You never let me forget my arrogant ways, do you Miss Anderson? Now let’s go have some fun, shall we?”

How could I argue with this playful side of Rich?

“Lead the way, Mr. Davis,” I said with the widest possible smile on my face.

We took a cab back to The Plaza where Rich insisted I change into something warm and comfy. I went into my bedroom and changed into a pair of skinny jeans and my favorite white, cashmere sweater. I pulled on my pink Ugg boots and completed my ultimate snow-bunny look with my matching pink puffy jacket. After wrapping my scarf around my neck, I added a knit headband to cover my ears. I figured I would be prepared in case Rich was planning an outdoor activity.

I headed downstairs to the living room and noticed that Rich was already waiting for me, dressed in his winter gear.  I tried my best to hide my disappointment after seeing his ski jacket covering so much of his sexy body.

“Where are we headed, Rich?”

“That’s my surprise, Brooke. You said you had never been to the city before and I thought we could have some fun and maybe tackle a couple of those locations that are probably in your precious Frommer’s Travel Guide.”

I soon realized, when Rich didn’t immediately hail a cab that we were walking across the street to Central Park. Rich’s hand clung to mine as we made our way through the gates and headed toward the signs that pointed toward the Wollman Rink.

“Oh my god, are we going ice skating?” I questioned, as I began jumping up and down on the sidewalk.

“Somehow, I knew you would love this. Is this part of your Home Again movie, too?” he asked.

I couldn’t help but laugh at Rich’s error. “First, it’s Home Alone and no, no ice skating. I’ve just always dreamt of skating in Central Park. And, we’re also so close to the zoo.”

“Well, I’m not sure if we’ll have time to make it to the zoo. If memory serves, it closes fairly early in the winter. But, I do have another surprise planned for this evening.”

Rich and I rented skates and glided over the ice for several hours. The snow started coming down more heavily as the afternoon flew by. After I was certain that my nose was going to fall off, Rich pulled me into a warm embrace. I gazed into his eyes and knew he was going to come in for a kiss. In that moment, I desired his kiss more than my next breath, but instead of letting my heart win, my head pulled away from Rich’s arms. “Just colleagues,” my inner voice whispered.

Although no words were spoken between us, the carefree atmosphere that had lingered between us all day began to fade away. I had ruined what would have been the most beautiful and romantic kiss in the middle of the Wollman Rink in Central Park. If our lips had met, the falling snow would have coated us both in a light dusting. My already rosy cheeks would have further flushed as a result of his tongue dancing with mine. But, I had ruined that picture-perfect moment. Instead, I just wanted to go back to my room and sulk. Why do I have to be so damn stubborn?

Even though I wanted to head back to the suite, Rich wouldn’t hear of it. He may have lost some of his earlier, carefree spunk, but he was still determined to show me the “right way to play hooky.”

“If you’re gonna be a slacker and play hooky, you might as well do it up right,” he kept saying.

We grabbed hot cocoas and hot dogs, minus the pickles for me, from a street vendor, before Rich waved down a cab to take us the few blocks to his surprise destination.

I laughed to myself when I realized we were stopping at Rockefeller Center. “Hey, this one is in the movie,” I said, as I lightly nudged him in the side.

“I figured. Any Christmas movie set in NYC has to include the tree here.”

It really was beautiful. As I stood there in Rockefeller Plaza looking up into the tree, illuminated by thousands of tiny white lights, I began thinking about how perfect this day had been. I didn’t want to leave because I was afraid of what tomorrow might bring. I didn’t want to think about Rich’s possible relationship with Janine, my career, or my reservations about us. I just wanted to stay here with Rich – forever.

About the Author:
M.C. Decker is the author of the upcoming, debut novel, Unwritten. She lives in a suburb of Flint, Michigan with her husband and spoiled-rotten Siamese cat, Simon. For the last decade, she has worked as a journalist for several community newspapers in Michigan’s Thumb region. She enjoys all things ‘80s and ‘90s pop culture: movies, boy bands, music and especially the color, hot pink. She also strictly lives by the motto, “Life is better in flip flops,” and is a diehard Detroit Tigers fan. You can e-mail her at author.mcdecker@yahoo.com. She would love to hear from you.

a Rafflecopter giveaway
Posted by Anonymous at 8:30 AM