A Song For Us (White Trash Trilogy #3) by Teresa Mummert 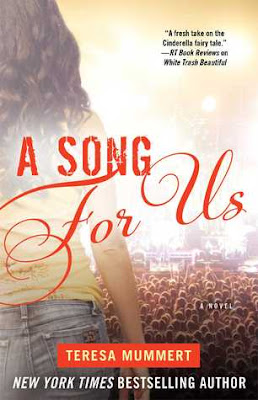 From a small-town boy with fantasies of superstardom to rock star on tour with the suddenly famous band Damaged, Eric’s life has not been an easy journey. Now he struggles to let go of his past of physical abuse, a past that still haunts him. His anger is causing him to spiral out of control and he risks losing everything he has worked so hard for.

Only one person has ever gotten him to open up about his past: Sarah, the lead singer of Filth, the opening act on their first national tour—a fellow rocker with a confident façade that masks her own painful secrets. But their bands’ rocky past and Sarah’s tumultuous relationship with her bandmate and boyfriend Derek force her to keep Eric at a distance. As their friendship begins to grow into something more, Eric has to find a way to let go of his tortured past, or it could jeopardize his only chance for a happy future...

Of the three books in the White Trash series, this one has been my favorite. This story is full of angst, and heartbreak and moments where I was left wondering what the heck Sarah was thinking, but I loved it. It was the intense connection and unwavering need between Sarah and Eric that really made for a heart-stopping story.

Eric is the drummer for Damaged and Sarah is the lead singer of Filth. Eric is moody and always seems to be pissing someone off, but I love that he isn't the typical rock star. He doesn't screw groupies. On stage, Sarah's presence is magnetic and she's so confident. But underneath the facade, they are both full of hurt, anger and guilt for what they went through as kids.

When E and Sarah met on tour, back in book two, there was an instant connection. They just got one another and along the way E developed strong feelings for her. But Sarah is in love with her cheating, douchebag of a bandmate, Derek. Somehow she has convinced herself that he can change his ways. Everyone around them can see that Derek doesn't deserve Sarah....except for Sarah. Derek and Eric hate each other and Sarah ends up in the middle, left to choose. She makes her decisions based on fear and sometimes it's really hard to watch. It's a serious emotional rollercoaster, but the build-up is so worth it in the end.


"I wanted to press my lips against hers so hard she forgot her own name."

This series was the first of Teresa Mummert's books that I've read. Her writing just flows and makes it so easy to get lost in the world she has created. I'm looking forward to reading more of her books.