The Trouble with Dukes (Windham Brides #1)
by Grace Burrowes 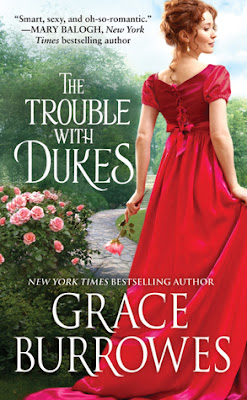 THEY CALL HIM THE DUKE OF MURDER...

The gossips whisper that the new Duke of Murdoch is a brute, a murderer, and even worse—a Scot. They say he should never be trusted alone with a woman. But Megan Windham sees in Hamish something different, someone different.

No one was fiercer at war than Hamish MacHugh, though now the soldier faces a whole new battlefield: a London Season. To make his sisters happy, he'll take on any challenge—even letting their friend Miss Windham teach him to waltz. Megan isn't the least bit intimidated by his dark reputation, but Hamish senses that she's fighting battles of her own. For her, he'll become the warrior once more, and for her, he might just lose his heart.

Listen to Chapter 1 of the audiobook!

AUTHORS LOVE THE TROUBLE WITH DUKES!

“The hero of THE TROUBLE WITH DUKES reminds me of Mary Balogh's charming men, and the heroine brings to mind Sarah MacLean's intelligent, fiery women... This is a wonderfully funny, moving romance, not to be missed!” —Eloisa James, New York Times bestselling author of My American Duchess

“Grace Burrowes writes from the heart--with warmth, humor, and a generous dash of sensuality, her stories are unputdownable! If you're not reading Grace Burrowes you're missing the very best in today's Regency Romance!” —Elizabeth Hoyt, New York Times bestselling author

“THE TROUBLE WITH DUKES has everything Grace Burrowes's many fans have come to adore: a swoonworthy hero, a strong heroine, humor, and passion. Her characters not only know their own hearts, but share them with fearless joy. Grace Burrowes is a romance treasure.” —Tessa Dare, New York Times bestselling author

“THE TROUBLE WITH DUKES is captivating! It has everything I love in a book--a sexy Scotsman, a charming heroine, witty banter, plenty of humor, and lots of heart.” —Jennifer Ashley, New York Times bestselling author of The Madness of Lord Ian Mackenzie 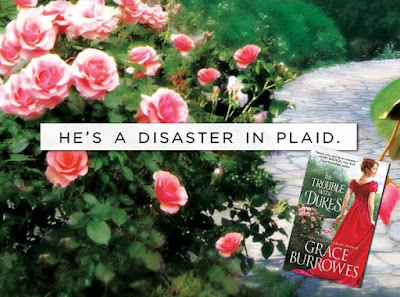 The Trouble with Dukes was a sweet and charming historical romance! Even though I really liked the plot of this book, I definitely felt like the story was on the slower side. That made it hard to get into the book. However, as I started to learn more about the characters, I did get more invested in the story. I also was expecting this book to be a little steamier and more passionate, but it was still a very romantic read.The main characters, Megan and Hamish, were very interesting characters. What a liked the most about Megan was that she wasn't afraid to stand up for herself, especially when surrounded by rich and powerful men. I thought she was fun character to read from the perspective of. Hamish was a sexy man with a lot hidden underneath the surface. I loved how sweet and caring he was with Megan. He had a cute nickname for Megan that made me smile every time he said it! I also liked a lot of the side characters, so I was happy that some chapters in this book were dedicated to them! I hope they will get their own books in this series! The author did a great job at creating a diverse and lovable cast of characters.I thought Megan and Hamish made a sweet couple, and by the end of the book, I really liked them together. I liked how they made each other stronger! However, I did think the romance was a little fast-paced. That made it hard to for me to believe the romance at times. The sexy scenes weren't extremely steamy, but they were well written! Overall, I thought this was a fun start to a new series. I am looking forward to the next book in this series, but I hope it will be a little better paced. If you are looking for a sweet historical romance, then you should check this book out!

Grace Burrowes grew up in central Pennsylvania and is the sixth out of seven children. She discovered romance novels when in junior high (back when there was such a thing), and has been reading them voraciously ever since. Grace has a bachelor's degree in political science, a bachelor of music in music history, (both from Pennsylvania State University); a master's degree in conflict transformation from Eastern Mennonite University; and a juris doctor from the National Law Center at the George Washington University.

Grace writes Georgian, Regency, Scottish Victorian, and contemporary romances in both novella and novel lengths. She's a member of Romance Writers of America, and enjoys giving workshops and speaking at writers' conferences. She also loves to hear from her readers, and can be reached through her website or her social channels.