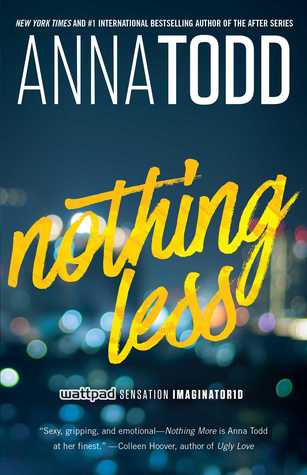 Book 2 of a new series featuring After worldwide fan-favorite Landon Gibson as he leaves Washington to navigate love and life in New York City. At the end of the After Ever Happy, Landon got married—but readers everywhere have been wondering who will get to call the nicest boy in the After series their forever love? Read it and find out!

“I'm so excited for everyone to get to know Landon Gibson. Whether you're just hearing about him or already know him from the After series, I know that readers are going to love his story. He's kind and fiercely loyal, and when he falls in love, he loves hard.” (Anna Todd, New York Times and #1 international bestselling author of the After series)

Nothing Less starts off right where the last book left off. Landon and Dakota have ended things, but somehow they can't give each other up yet and sometimes that can be a problem. Landon finds himself wanting to know Nora more and more, but she is hell bent on keeping him out.

Landon is such a sweet guy! He has always been that guy, even in the After Series. He's always been the one Tessa can lean on and even at times Hardin, so I guess it was time that Landon be the one struggling to figure his relationships out. He knows he wants more with Nora, but she is so mysterious in her ways. She doesn't want a relationship, or for Landon to get to know too much about her, but she wants to be friends. That just drove me bonkers because they are clearly majorly attracted to each other! And even after they get closer Nora is still keeping him at arms length, dear god woman just stop! Landon can't turn to Tessa for advice because that is a major conflict since she and Nora are god friends, so he goes to the only other person he can which is Hardin. That just cracked me up because Hardin is still a mess in a lot of ways, and he still needs to fix his crap with Tessa! Anyway, he wasn't so bad at the advice part though.

I love the way Landon and Dakota's relationship progressed throughout the book. They have a lot of history and Landon wasn't just going to cut her off, because it's not right. Sometimes people are so much a part of your life that even if the relationship changes they will always be there, sometimes very minimally, but there none the less. Now all we were waiting for was whatever the heck Nora was hiding! Will their new relationship survive that storm?!

Landon proved time and time again that he is a man of his word! I loved him then, I love him now, I will always LOVE HIM! If you're a fan of the After Series, you do not want to miss out on Landon's story!

*A complimentary copy was provided in exchange for an honest review.
Posted by MrsJZBarrons at 10:00 AM