Tempest in the Highlands (The Scottish Relic Trilogy)
by May McGoldrick 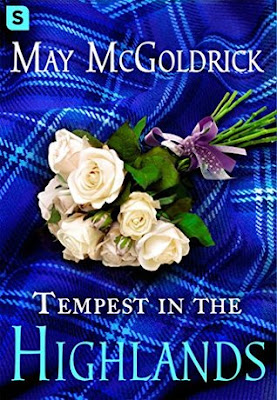 Miranda MacDonnell is on the run. When she inherited a mysterious relic from her mother, she had no idea the dangers it would bring. Now hunted by a relentless foe who will stop at nothing to find her, she has one choice: stow away on the ship of the notorious privateer, Black Hawk.
Rob Hawkins, the half-English privateer known as Black Hawk, has a mission from the Tudor king to find and kill the rogue commander, Sir Ralph Evers. To complete his quest, Hawk must find Miranda, a young woman Evers is pursuing. Caught in a tempest, he is shipwrecked with a "boy" who demonstrates an uncanny ability for saving him. Cast away on the mysterious Isle of the Dead, Hawk realizes that the "boy" traveling with him is actually Miranda MacDonnell and having her means that Evers will come to him. What begins as a ploy —using her as bait—soon changes, however, as he falls in love with her.
Ancient forces are at work, drawing the four possessors of the relic’s power to the Isle of the Dead in the Outer Hebrides for a final battle where good must overcome the forces of evil in this spectacular finale to the Scottish Relic Trilogy.

One moment, Miranda was gasping for more air. The next, her very existence depended on how close she could get to him. The touch of his lips freed her mind and made her body soar. The tension gripping her limbs and her lungs melted away in an instant. She shivered involuntarily and her arms tightened around his neck.
Hawk’s mouth moved back and forth over her burning lips, urging them to open. Surrendering to his silent demand, she parted her lips. She heard the groan deep in his throat as he took a fistful of her hair and his tongue plunged deep into the soft recesses of her mouth.
A silent thrill of desire raced through her. She’d never been kissed by a man before. But right now, all fears were forgotten. The trap in which they found themselves became trivial. Miranda allowed the rising hunger she had for him to erupt within her.
Lost in the seductive play of his tongue, the heat of his embrace, and his roaming hand, she responded with passion.
He lifted her higher in his arms and pulled her legs around his hips.
Her body ached for his touch, her heart pounded, and her mind whirled in the closeness of his embrace. Miranda gave another low moan of surrender as he deepened the kiss.
She didn’t know for how long they were lost in the kiss, but when he tore his mouth away, he was as breathless as she had been.
“This is a dangerous game we’ve started,” he said.
She understood what he was saying. It was impossible to not feel his erection pressing against her. Unwrapping her legs from his waist, she tried to float away, but his arm around her waist kept her close.
“I don’t mean to scare you off,” he said. “But you’re too beautiful, too tempting, and I’m a man.” Hawk released his hold on the wall, and they floated together. His gaze never left her face. “But I want you to know you can trust me.”

Tempest in the Highlands was an adventurous and satisfying end to The Scottish Relic trilogy. I thought the characters were enjoyable and that the plot was exciting. This was a nice way to wrap up this trilogy!I am a HUGE fan of books when girls dress up as a male to achieve their goals. I find those plot lines to be so exciting, fun, and addictive. I think it stems from my love for Mulan , because the girls who typically pull a stunt like that are bad-asses. Miranda, the main female character, was no exception to that rule. Miranda had a sharp tongue and would stand up for herself. I really liked how she wouldn't let people push her around because she appeared smaller and weaker than everyone else. Miranda had a strong mind, and I appreciated that.The main male lead, Rob, was very dreamy. I thought he was funny and sexy! I was actually surprised at how nice he was. I was expecting Rob to be rougher around the edges! It was nice to have a really sweet guy when he had such a tough looking exterior. The romance was passionate in this book! I thought the pacing of the relationship between Rob and Miranda was very believable in the beginning of the book. Their relationship felt natural and slow paced. When they finally kissed, I thought the timing was appropriate. However, I thought they jumped into the "I love you"s too quickly, which was the same issue I had with the previous book. The romance was progressing nicely and then I felt like it was all rushed towards the end. I would have enjoyed the romance more if we got an epilogue at the end and that was the first time they said: "I love you". However, I thought the romantic moments themselves were well written and steamy. The plot of this book was interesting and exciting! There were some parts that felt rushed and some parts felt a little slow, but I thought the book was well paced as a whole. The magical elements that were weaved into this story were interesting and unique. The description of the scenery was great too. I just want to go to Scotland now! Overall, this was a fun and addictive read. I would recommend this book to anyone wanting a historical romance with magical elements. 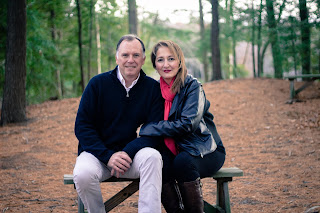 Authors Nikoo and Jim McGoldrick (writing as May McGoldrick) weave emotionally satisfying tales of love and danger. Publishing under the names of May McGoldrick and Jan Coffey, these authors have written thirty-five novels and works of nonfiction for Penguin Putnam, Mira, HarperCollins, Entangled, and Heinemann. Nikoo, an engineer, also conducts frequent workshops on writing and publishing and serves as a Resident Author. Jim holds a Ph.D. in Medieval and Renaissance literature and teaches English in northwestern Connecticut.