Don't Tell Anyone by Eleanor Gray 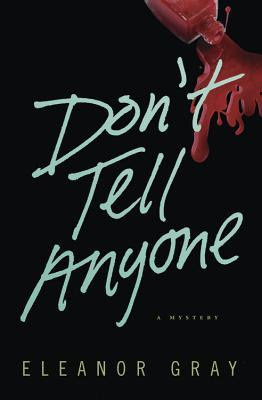 Nearly lost in a fog of grief over the fatal stabbing of her daughter, art historian Grace Neville feels only sorrow as Jordan Dukes is found guilty of murder. Days after the sentencing, Grace receives a visit from Jordan’s father, who claims that his son is innocent and a grave miscarriage of justice has taken place. Jordan’s history of gang-related violence and the fact that he doesn’t have an alibi make his father’s plea hard to believe. But then why does somebody break into Grace’s home and go through her daughter’s belongings?


In Don’t Tell Anyone, Eleanor Gray explores the relationship between a mother and a daughter, and the secrets that drive Grace to seek the truth no matter what the cost.

Grace Neville has lost her daughter. She hasn't even finished grieving for the loss of her marriage when her daughter is murdered, stabbed in a hotel room. Her ex-husband Archie left her three years ago for a younger woman, Kristina, but Grace has never stopped loving him.


After the death of Tara, Grace has stopped living. Her grief is profound and never ending. She goes through the motions, including attending the trial of Jordan Dukes, the man responsible for her daughter's death. She feels some peace when he's sentenced to prison for many years. Not soon after, the father of the accused, Allan Dukes approaches Grace and creates doubt about who murdered her daughter. Grace can't seem to shake the uncertainty which becomes stronger when she realizes someone has been in her home and gone through her daughter's things.


I thought this was a good suspense novel. It had a few twists with the "who done it" changing a time or two.

I liked Grace, despite her obsession with her ex-husband who was a spineless loser. I wanted to shake her a few times and say: open your eyes! Her family dynamic was also crazy. Her relationship with her sister was a mess. One character I was surprised to like was the mom's boyfriend. He was tough and was ready to keep his "family" safe. Too bad he couldn't help Tara.

Don't Tell Anyone had a good pace and a few surprises too. I would be happy to read another book by this author.