The Rebel of Clan Kincaid (Highland Warrior #2)
by Lily Blackwood 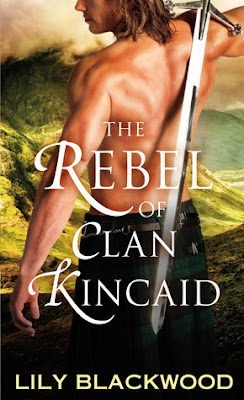 LOVE IS A BATTLEFIELDSince childhood, Magnus has been led to believe he is the Laird Alwyn’s bastard, and raised to hate the Clan Kincaid. But when he learns he is without a doubt the son of the murdered Laird Kincaid, his life as he has always known it is shattered. Now, hiding his knowledge and his fury, he returns to Burnbryde Castle, awaiting the chance to strike against the man whose treachery robbed him of his legacy. His first act of rebellion: to steal a kiss from the redheaded beauty who’s betrothed to the Alwyn’s eldest son and heir.Since her arrival at Burnbryde, Tara Iverach has been confined to a tower to guard her virtue before she marries. But after a surprise embrace with a lean, bare-chested Highlander who claims to be the Alwyn’s oldest son, she can’t contain her excitement over her good fate. Unfortunately, he is the wrong eldest son, and she is set to marry his cruel and lecherous half brother, Hugh. Can Magnus conquer his rivals and claim his Kincaid destiny before the woman who’s captured his heart becomes his sworn enemy’s bride?“Blackwood is a fantastic new voice in Scottish romance. Get ready to be carried away!”—New York Times bestselling author Monica McCarty

After finishing the previous book in this series, I was very intrigued to see the author was going to do with the unanswered storylines in that book. Thankfully, The Rebel of Clan Kincaid picked up right where the last book left off! I was happy to dive right back into this world and reconnect with the characters. I was especially excited that the characters from the previous book were present in this novel as well.
This book was a slower paced book, but that wasn't necessarily a bad thing. There was a lot of time dedicated to planning, scheming, and wondering in this book which was very interesting at times. The slower plot made sense for the storyline, but I was hoping for a little more action or fast-paced plot development. I was happy that near the end of the book, the pace picked up a lot! The drama and mystery all came to a head near the end, which had me flying through those pages!
The main characters of this book, Magnus and Tara, were very likable. What I loved about Magnus was that he was a bad ass with this strong and tough exterior, but he was actually very sweet underneath all of that. I really admired how kind and considerate he was, especially towards women. Tara was a brave a strong woman, which was really enjoyable to read about. I really liked reading from her perspective!
Objectively speaking, I really liked Magnus and Tara as a couple. I thought their personalities and desires match up really well. However, I didn't necessarily like the execution of their relationship. Their romance felt very rushed, and I was hoping for more of a slow simmer. I wish they would have been able to spend more time together because I think that would have helped the romance feel more believable. Magnus and Tara definitely had some steamy moments together, which I thought were very well written. I think the author did a great job at creating sexual tension in those moments!
There was one plotline in this book that caused a rift between Tara and Magus, which I was not a fan of. I understand creating tension between a couple, but this tension felt very unnecessary, especially because something similar happened in the previous book. I wasn't a huge fan of the way this issue was handled, and I felt like one character got off the hook way too easily.
Overall, I thought this was an engaging and steamy read. The author has a way of always pulling me in with her writing! I did have issues with this book, but I still liked it as a whole. I am really looking forward to the next book, which I am assuming will be focused on the other missing brother! Bring on the next sexy Scot!
If you are looking for a new historical romance to start, I would recommend checking this series out!

3 / 5 Fangs
*This ebook was given to me in exchange for an honest review. *
Posted by MissDaemon at 8:00 AM