Rules of Contact (Play by Play #12)
by Jaci Burton 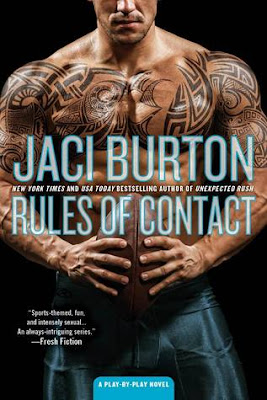 In the new Play-By-Play novel by the New York Timesbestselling author of Unexpected Rush, a football player with all the right moves on the field needs a better game plan for his love life.   A defensive end for the San Francisco Sabers, Flynn Cassidy is used to being in the spotlight—he just doesn’t enjoy it. But if getting in front of the cameras will help his new restaurant succeed, he’s willing. Now if he could just meet a woman who loved him and not his fame… After her divorce, Amelia Lawrence is thrilled to start over as head chef at Ninety-Two. It’s just the opportunity she needs to heat up her career—if only she wasn’t wildly attracted to her sexy new boss. Their chemistry might be sizzling hot, but Amelia has no intention of being burned again.  Amelia is genuine and fun and Flynn can’t get enough of her—and Amelia loves every second she spends with the tough but tender Flynn. But trust is a hard fought battle for both of them. Breaking the rules of contact and surrendering to their passion was easy, but are they willing to risk their hearts to win at the game of love?

I haven't read a book by Jaci Burton before, but I have always heard great things about her books. I am so glad that I read Rules of Contact because I now understand the love for Jaci's books! I now want to go back and read all of the books in this series. If you haven't read any books in this series, you can read this as a stand-alone, but I am cautioning you that you will want to go and read all of the previous books ASAP. Also, this book will make you SO HUNGRY! The food Jaci described made my stomach growl.

Rules of Contact was a fun and easy read. This book was heavy on romance and steam and low on angst. I was so thankful for that because I was in the mood to just sit back and soak in the romance.The little conflict that was there was solved pretty quickly, which I was thankful for because I did not want that drama to take over the book. The romance was well paced and full of chemistry. I thought Jaci did a great job at creating chemistry between Flynn and Amelia. The sexy moments were full of heat! Jaci nailed those scenes! Some parts of this book were a little slower than others, but I still blew through it!Flynn was a great male lead. Flynn was charming, sweet, thoughtful, and family-oriented. I really liked how focused he was on his adorable family. Some of his chapters were mainly focused on his family, which lead to the book feeling a little slow because I wanted to get back to the romance! However, a few of those scenes were really heart-warming! Amelia was another great character! I thought Amelia was a great match for Flynn. Amelia was a bit uptight and very job-oriented, so it was nice to see her loosen up! I admired Amelia's desire to be the best at her job and her unwavering dedication to cooking.Overall, this was an enjoyable romance! If you are looking for a book with a dash of romance and a huge focus on an outside plot and angst, then this is not the book for you. However, if you want to read about a fun and SEXY romance, then this is the book for you!