Ever the Hunted (Clash of Kingdoms #1)
by Erin Summerill 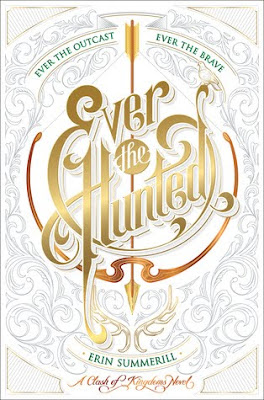 Seventeen year-old Britta Flannery is at ease only in the woods with her dagger and bow. She spends her days tracking criminals alongside her father, the legendary bounty hunter for the King of Malam—that is, until her father is murdered. Now outcast and alone and having no rights to her father’s land or inheritance, she seeks refuge where she feels most safe: the Ever Woods. When Britta is caught poaching by the royal guard, instead of facing the noose she is offered a deal: her freedom in exchange for her father’s killer.

However, it’s not so simple.

The alleged killer is none other than Cohen McKay, her father’s former apprentice. The only friend she’s ever known. The boy she once loved who broke her heart. She must go on a dangerous quest in a world of warring kingdoms, mad kings, and dark magic to find the real killer. But Britta wields more power than she knows. And soon she will learn what has always made her different will make her a daunting and dangerous force.

Ever the Hunted was a fun a promising start to a new YA fantasy series! Even though this book was predictable at times and had some common YA tropes, I still found it to be very entertaining!The first part of this book was definitely on the slower side. Even though it was on the slower side, I didn't find it boring! Instead, I found that portion of the book to be quite interesting. The first part of the book did a nice job setting up the world and the conflict between the different kingdoms. Some of the world and the magic was not fully explained by the end of the book, so I am hoping for more clarification in the next book! I am also really looking forward to more action, kick-assery, revenge, and magic in the next book. The second part of this book was a lot more exciting, and I loved the direction the author took the plot. Storylines started intertwining, which was really awesome! Things were revealed and I was on the edge of my seat the entire time! The ending of this book left me excited to get my hands on book two. The main character, Britta, was a very likable character, even if she was little hard to connect with. I never found Britta to be annoying or childish. I thought she was a very strong and interesting character to read about. I am really interested in seeing how she develops throughout this series. I think she has the potential to become even more of a badass!

One thing I will point out about Britta is that she fit into the YA trope of "special snowflake". If readers do not like stories about those types of characters, then I think they might have a hard time LOVING Britta. I find that trope to be very annoying at times, but it didn't really bother me in this book. Sure, the trope made some of Britta's storylines predictable, but I didn't hate it. I thought the author did a good job at making Britta likable, which I believe is the reason I didn't hate the "special snowflake" aspect.


The romance in this book was a bit predictable and common, but I still thought it was very cute. The romance felt believable and well paced because the author established an interesting history between the couple. I liked learning about the history between Cohen and Britta bit by bit throughout the story. I will say that the tug and pull of their relationship was a little frustrating at times, but I still enjoyed the romance immensely. Cohen did and said some things that were very dreamy! I don't necessarily think he stands out as an incredible love interest, but I still found myself falling for his cuteness.


Even though I enjoyed the romance and I am a romance lover, I would have liked a little more action instead of romance in this book. That being said, I look forward to seeing how the romance develops throughout this series.

Overall, Ever the Hunted was an entertaining YA fantasy novel! I would definitely recommend this novel to anyone who is looking to pick up a new fantasy book, especially if you want one with romance.

Now, give me book two!