The Ice Beneath Her by Camilla Grebe 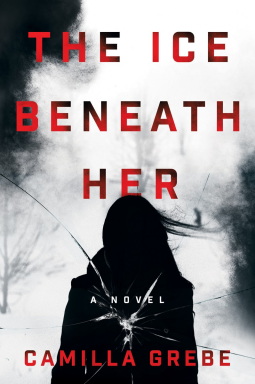 For fans of Jo Nesbo and The Bridge, The Ice Beneath Her is a gripping and deeply disturbing story about love, betrayal and obsession that is impossible to put down. Fast-paced and peopled with compelling characters, it surprises at every turn as it hurtles towards an unforgettable ending with a twist you really won't see coming . . .

A young woman is found beheaded in an infamous business tycoon's marble-lined hallway.

The businessman, scandal-ridden CEO of the retail chain Clothes & More, is missing without a trace.

But who is the dead woman? And who is the brutal killer who wielded the machete?

Rewind two months earlier to meet Emma Bohman, a sales assistant for Clothes & More, whose life is turned upside down by a chance encounter with Jesper Orre. Insisting that their love affair is kept secret, he shakes Emma's world a second time when he suddenly leaves her with no explanation.

As frightening things begin to happen to Emma, she suspects Jesper is responsible. But why does he want to hurt her? And how far would he go to silence his secret lover?

"There is no doubt humans are the planet’s most dangerous animal; we constantly hunt and kill not only other species, but our own. "

This book was different. The writer had a way of telling the story in a very unique way.

The novel is told from three different points of views.

Peter Lindgren is a police detective who's called to assist with a new murder. A woman is found decapitated in the home of the famous CEO Jesper Orre.  Jesper has been in the news for having a very active love life and problems within his company too. Peter is also dealing with his ex-wife and son which he barely has a relationship with. Peter is a commitment phobic. There was only one woman he has cared for and he lost her ten years ago.

"It occurs to me that love isn’t just what you feel for another human being, it’s also seeing yourself through your lover’s eyes. To see beauty where before you saw only flaws."

Hanne is the second voice. She is a profiler who has done consulting for the police. She recently has been diagnosed with early dementia and has decided to leave her husband whom she has never loved. She almost left him years earlier but her plans failed. She's having a hard time dealing with her diagnosis and the only thing keeping her going is her research and her love of the Inuit people.

Third, there is Emma Bohman. Her story starts two months earlier when she meets and starts dating Jesper. Her life is happy until Jesper starts changing. Jesper has always wanted to keep their relationship quiet. Suddenly, Emma is left without money or Jesper.

Peter and Hanne will work together to try to piece together the woman's identity and motive for the decapitation.

What a great twist The Ice Beneath Her had! It was well-thought and eerily scary. The human mind is such a whirlpool of thoughts and actions with a slim balance. Anything can tilt the scale.

A complimentary copy was provided by Ballantine Books via Netgalley in exchange for an honest review.