A Kingdom of Dreams (Westmoreland Saga #1)
by Judith McNaught 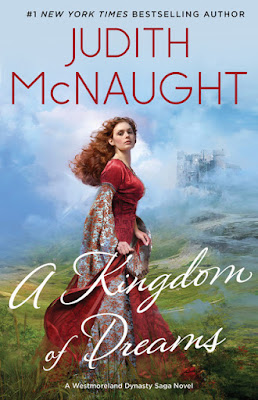 Abducted from her convent school, headstrong Scottish beauty Jennifer Merrick does not easily surrender to Royce Westmoreland, Duke of Claymore. Known as "The Wolf"; his very name strikes terror in the hearts of his enemies. But proud Jennifer will have nothing to do with the fierce English warrior who holds her captive, this handsome rogue who taunts her with his blazing arrogance. Boldly she challenges his will . . . until the night he takes her in his powerful embrace, awakening in her an irresistible hunger. And suddenly Jennifer finds herself ensnared in a bewildering web . . . a seductive, dangerous trap of pride, passion, loyalty, and overwhelming love.

A Kingdom of Dreams was a classic historical romance. There was plenty of drama, swoons, and sexy time. I enjoyed the two main characters, Jenny and Royce. Jenny was determined, passionate, strong, and brave. I admired how she stood up for herself, especially to men! I will say that she was a bit too proud, selfish, irresponsible, and immature. Those aspects of her got on verge of annoying and frustrating throughout the book. It was hard for me to root for her when was doing and saying idiotic things.In my mind, I was expecting Royce to be a savage asshole. Instead, he was actually understanding and thoughtful. I really liked that about him! He surprised me with his kindness. However, I would have liked him to seem to a be a bit more of a ruthless and scary man, considering his "Wolf" reputation.The sexy scenes in this book were very steamy. I thought the author did a great job at writing passionate and sexy moments between Jenny and Royce. The chemistry between Jenny and Royce in those moments felt palpable. Ideally, I would have liked to have seen the sexy scenes a little later in the book so the romance would have felt like more of a slow burn. However, as I said, they were still enjoyable scenes to read! For being such a "tough" guy, I did think Royce's interest in Jenny developed a little too quickly. I was hoping for a more drawn out romance between the two "enemies". I think that would have made the romance pack more of a punch. However, I did like Royce and Jenny together. I thought their personalities worked well together!

The miscommunication between Jenny and Royce drove me INSANE. I wish they would have just told each other the truth about things and talked it out! I will say that the romance did have very swoony and heart-tugging moments. Royce had some dreamy lines and romantic gestures! The author did a great job at writing those moments that made me swoon. She is great at written a classical romance.
The overall plot of this book was interesting and a lot of fun! I liked the sexy moments and the humor that the author weaved into the story. I thought chunks of the book got a tad slow due to the focus on the drama. I think this book could have benefitted from being shorter by cutting out some of the drama. The ending of this book put a smile on my face and left me feeling satisfied. I am intrigued to see what happens in book two.3 / 5 Fangs*This book was given to me in exchange for an honest review. *
Posted by MissDaemon at 8:00 AM