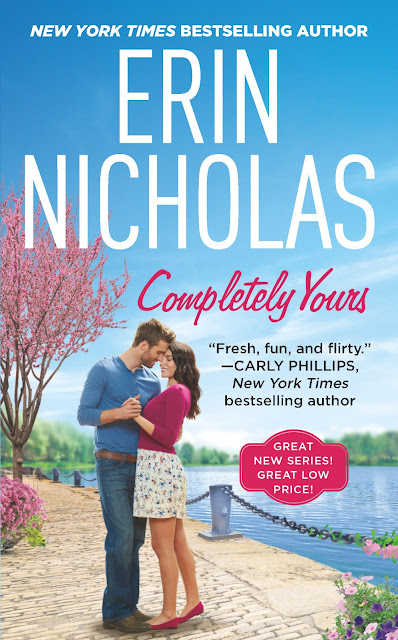 The first book in a brand new contemporary romance series from New York Times bestselling author Erin Nicholas about three geeky girls and the hunky guys who fall for them.

Kiera Connelly leads a quiet life, and that's just how she likes it. She's built a name as a graphic designer and meets up with her friends online, all from the comfort of her living room couch. But when a rare outing turns disastrous, Kiera finds herself up close and way too personal with an unbelievably hot real-life hero.

Zach Ashley doesn't see himself as a hero. He's just a regular guy who gets to help people every day as an EMT. But when he's called to a scene and has to treat his most gorgeous patient ever, he finds himself mixing work with pleasure. He never hesitates to put his life on the line...but will he ever risk his heart?

COMPLETELY YOURS, #1
FOREVER MINE, #2 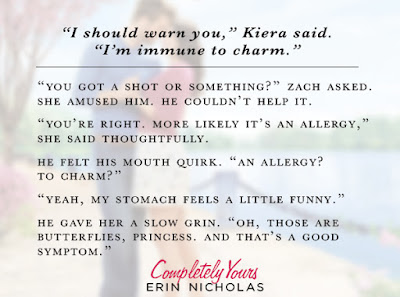 If you are looking for a romantic book to put a smile on your face, then this is the book for you. Completely Yours was a fluffy and adorable novel. I had a smile on my face throughout the majority of this book. I am so excited to continue with this series!I really loved the main female character, Kiera. Kiera was introverted, geeky, and so sweet. I really enjoyed being in her head and geeking out along with her throughout the story. It was fun to have the main character be on the geekier side! I loved learning about Kiera's cosplay and her online gamer life. Zach was a typical heroic male. He was sexy, charming, and very outgoing. He really did seem to be the opposite of Kiera, but they actually worked so well with each other. It was really sweet to watch them expose each other to new things and watch them grow together. The romance was so precious and adorable. I loved it!

The chemistry between Kiera and Zach also lead to some very steamy moments that I also enjoyed. ;)

This book was low on drama and angst, which I was thankful for. The drama and angst that was there got solved in a quick manner that made me very happy!

There were a lot of side characters that I really enjoyed! The author made sure not to skip out on writing charming and funny side characters. I liked their development throughout this story, and I am excited to see them develop even more in the next books.

Overall, this was a cute and heartwarming book. If you are in the mood for a fluffy and adorable romance novel, then I would recommend that you check this book out!

4 / 5 Fangs
*This ebook was given to me in exchange for an honest review. *

I decided to read this book because it just looked like one of these feel good romance stories, and it did not disappoint! Erin Nicholas, had me laughing, swooning, and completely geeking out!

Keira and Zach have an instant connection when he comes to assist with an emergency at Comic Con. They are so opposite that they somehow work together. Kiera is the geek, and Zach is the sports fanatic. I instantly felt a kinship with Kiera! Although I'm not a gamer, I know what it is to devote yourself to something (books) so strongly that you live and breathe it. Kiera's an introverted, cosplaying geek, which happens to be the best kind of character in my opinion. Zach doesn't seem to understand it, especially when his sister lives in the gaming world as well, but somehow Kiera helps him realize that he doesn't have to understand it to accept it.

I absolutely loved the sizzle between these two! There was an attraction that only grew the longer they tried reign it in, and when they finally got together it was damn HOT!

This right here is the perfect book to read when you don't want all the angst, tears, and heartbreak. These characters aren't perfect but they manage to make it with too much drama. I am very much looking forward to the next book in this series.

She was still watching the ambulance, and she nodded absently. “Okay.”
He moved in front of her and crouched to get on eye level. “You can go right over and see them at the hospital. Mass General. If you’re not family, they might not be able to tell you much, but if you can get in touch with their families, they can come and sit with you, right?”
She nodded again but Zach wasn’t sure she’d heard him. He really wanted to know that someone was going to be there with her. Shock in survivors wasn’t uncommon. The that-could’ve-been-me thing could kick in at any moment if it hadn’t already. But there was nothing like seeing someone you cared about hurt.
He put his hands on her arms again, this time rubbing up and down and just ignoring how good her skin felt against his rough palms. Mostly. He needed to comfort her more than he needed to worry about how she made him feel.
“Do you know where Mass General is?” He didn’t love the idea of her driving herself over there. She was clearly overwhelmed.
Kiera nodded. “Yes.”
“You can get there?” he asked.
She nodded again.
Okay. So…
“Zach! Let’s go!”
Zach glanced over at Reed. His co-workers needed help so he was going to be here for a while. He couldn’t be messing around, obsessing about a woman who liked to play dress-up. “Kiera, I need to go but…”
“Yeah, of course.” She shook her head and looked around. “You go.”
“But…” But nothing. She was fine, and he was needed by people who weren’t fine. “Okay.”
He had the fleeting thought that he wanted to kiss her goodbye. But that was crazy. They’d just met. In the middle of an emergency. No way should he kiss her.
Finally, he let go of her and stepped back. But not touching her didn’t do a thing to make him not want to touch her. He forced himself to turn away and head toward Reed, trying to clear his mind of green and gold sweet-smelling flowers as he went. But when he got about twenty feet from her, he glanced back.
And she was still standing there. Hugging herself. Looking lost.
Fuck.
“I’ll be right there,” he told Reed.
Reed glanced back. “Dude…”
“I know.” And he did. He needed to not be distracted. But the only way that was going to happen was if he knew for sure that Kiera was taken care of.
He jogged back to her side. “Hey princess, what’s up?”
She looked at him, and her look of confusion cleared. That made him feel stupidly good.
“I don’t have a way…”
She trailed off, and Zach frowned. “You don’t feel up to driving?”
“We brought Sophie’s car, and her fob thingy is with her.”
Ah. A little issue. “You have someone you can call?”
“I didn’t bring my phone.”
“You can use mine.”
“No one’s home. I live with Maya and Sophie,” she said. “Obviously, they’re not… there.”
Her voice wobbled, and Zach worked on not grabbing her and hugging her.
They’d just fucking met. Hugging and kissing wasn’t appropriate. Dammit.
“How about a cab?”
“I don’t have any money.”
He looked her over again, revisiting the curves he realized he’d already memorized. He could give her money for a cab of course. He could get her home. But she’d be home alone. He could get her to the hospital, but they wouldn’t talk to her and she’d be stuck in the waiting room for God knew how long. Alone.
And leaving her alone was simply something he could not do.
“You need to come with me.” He reached out and snagged her hand before he could tell himself that holding her hand was a bad idea.
Because it was. Her hand felt good in his, and the way she curled her fingers around his tightly and followed him without question felt good. And the idea that he was going to get to spend more time with her felt good. And all of that was bad. And yet, he pulled her along with him through the convention hall and into the heart of the chaos.
“What are we doing?” she asked.
“I need to go help with some more injured. And I need you to stick with me.”
“Me? Why?”
He looked over at her. Her cape floated behind her, and for the first time, he noticed the golden sword swinging at her left hip. Damn. That was kind of hot. “Because you’re a gorgeous kick-ass warrior princess, and the people in here are gonna need some gorgeous kick-ass stuff.”
She looked at him with surprise, but as he held her gaze, he saw something that turned him on even more than her smelling like candy—a spark of determination. She pulled up straighter as she walked, and he felt her hand tighten on his.
“Kick ass. Right. I can do that.”
He smiled. “And I could use some help from an interpreter.”
“An interpreter? I speak some Spanish but that’s about it.”
“You don’t speak geek?” He hoped he wasn’t committing a faux pau in calling her, and all of this, geeky.
But she actually gave him a half smile. “Oh, geek. Yes, I’m fluent.”