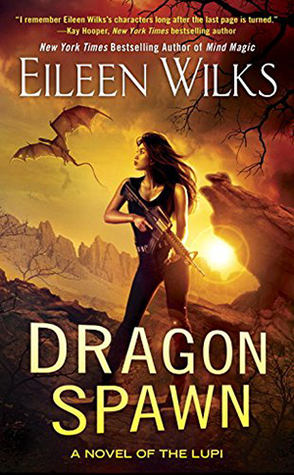 Lily learns she was right. Tom Weng—a powerful sorcerer allied with the Old One who keeps trying to take over the world—is still alive. But that's not the worst. Weng is a dragon spawn, the product of a botched hatching given a human form in an attempt to keep him from going mad. A failed attempt.

Meanwhile, Lily’s husband Rule is facing a Challenge to the death. Then there’s the possible reappearance of another sorcerer. But none of that matters when their enemy strikes out of nowhere in the worst way possible. Lily must face a nightmare and return to a place she never wanted to see again. The place where she died…

World of the Lupi is an excellent example of an Urban Fantasy. Mrs. Wilks has created a fantastic universe with some pretty memorable characters!

I get excited whenever a new book comes out because I can't wait to see what new adventure Lily, Rule, Cullen, and Cynna are about to embark on together.

Dragon Spawn is good from the very beginning. It has an excellent prologue, not because Cullen is wearing a speedo (which doesn't hurt) but because it gives you a taste of his commitment towards his family and also has some needed humor because once the action begins, there is not a lot of it left.

If you are familiar with the series you know that there has been a fight for centuries between the Lady (who the Lupi support/follow) and the Great Bitch (who is like Voldemort....you don't say her name because you give her power). The GB is powerful and she has tried directly or indirectly to kill them at different times.

Dragon Spawn has three storylines that I think are relevant.

First, a dominant is challenging Rule for the Leidolf mantle. A dominant is a Lupi who does not submit.

Second, chaos ensues when a bomb goes off in the FBI offices and missiles are sent to attack dragons including Sam.

Third, and the one that occupies most of the book, Tom Weng is alive and he, with the help of Ginger, is kidnapping the heirs of the different packs. This includes Toby, Rule's son. It also includes Ryder, the only female Lupi. Of course, their disappearance puts everyone on edge. Bringing the kids home becomes their only priority.

Dragon Spawn is novel with a great plot, action-packed and with a well-developed dynamic between the main characters.

My one objection to this story is the end. Talk about frustrating! It ends in a cliffhanger!!! 😒