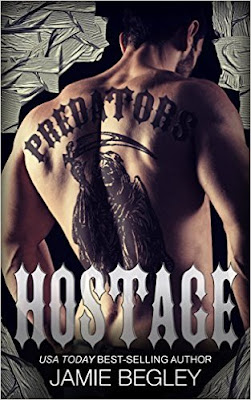 The Enforcer’s Oath: Protect the club at all costs.

Jackal made an enemy out of Penni when he kidnapped her years ago. He let her go, never imagining she would take a piece of his soul with her. Now protecting Penni against a former brother will force him to place the club against her once again.

She may be the Hostage, but he’s the one held captive by the lust she refuses to admit binds them together.

She thinks The Last Riders and another man will be all the protection she needs to end the tug of war between them. However, he’s never lost a battle, especially against a tiny blonde with an attitude, begging him to teach her that her place is under him.

To end the battle, he’s going to have to reclaim the piece of soul she stole from him or claim a part of her soul as prisoner.

When a predator takes you hostage, you’re his forever.

If you have read other books in the series, you know Penni and Jackal's story has been in the works for a while now. Jackal was responsible for kidnapping Penni in a prior book and she has not forgiven him for it. Since Jackal met Penni, no one else compares to her. He wants her with him and he's going to do everything is his power to make her his.

When Penni is taken by another club, Jackal's protective instinct jumps to the roof. He is willing to do anything for her. But, we all know what Penni's brother is capable of doing and Jackal will have to deal with Shade to keep her.

Now, to the bad news:

I was so excited for another one of Jamie Begley's books since I'm a huge fan of her MC world. However, I didn't love this book as I thought I was going to. Penni was not the smart chick I thought she was. She was constantly dismissing or pushing Jackal away. I didn't buy it when she finally realizes who she really liked. For that matter, Jackal didn't behave like an Enforcer of an MC club. He was weak. I didn't feel a true connection to this couple which makes me super sad.

The thing that saved this book for me was The Last Riders. Once we got to Treepoint, I was happy to see Lily, Beth, Diamond, Sex Piston, and their guys.

I do hope Killyama and Train's book is better.