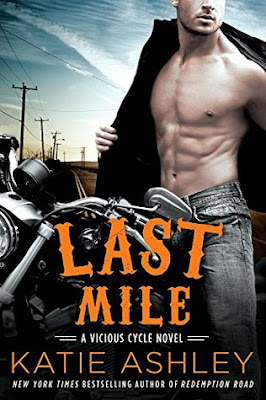 Katie Ashley, the New York Times bestselling author of Redemption Road and Vicious Cycle, returns to the dangerous and seductive world of the Hells Raiders motorcycle club…
After her father was murdered in the line of duty, ATF agent Samantha Vargas is determined to take down the scumbags of the drug trade. When her partner takes on a case to infiltrate the Hells Raiders MC, Samantha agrees to go undercover as his old lady but is surprised to find herself drawn to the very man she is investigating.
Benjamin “Bishop” Malloy has worked hard to carve a place for himself both in and out of the MC world. Working days as a mechanic, he spends his nights rebuilding motorcycles with the hope of one day owning his own shop. After taking one of the club’s new hang-arounds under his wing, Bishop is conflicted over his growing attraction for the man’s girlfriend.
Even though she’s determined to bring down the Raiders, Samantha discovers their world isn’t as black-and-white as she thought. And as the stakes grow higher, she’s in danger of losing more than her heart.

I rose off the picnic bench. As I set my longneck down, I could feel Bishop’s eyes burning into my back. When I glanced at him over my shoulder, his eyebrows rose questioningly. Slowly, I turned around. As I met his blazing baby blues, I held out my hand. His body shuddered slightly before he leaned up to put his hand in mine. I tugged him up off the bench, pulling him close to me.
His warm breath against my cheek, causing me to shiver with building anticipation. “What are you doing, Sam?”
Without a moment’s hesitation, I replied, “Getting you to take me somewhere we can be alone.”
He pulled back to look at me. Both longing and regret flickered on his handsome face. “You gotta know that nothing good is gonna come with me being alone with you right now.”
“I know.”
“And you’re okay with that?”
It was the same question raging through my mind. Did I want to fuck Bishop to get in even deeper with him because of the case or was it because I was starting to feel more for him than I should? In the end, I tuned out the voices in my head. “Yeah, I am,” I responded, my voice resonating with certainty.
With a brief nod, Bishop tugged on my hand and started leading me away from the others. We went around the back of the clubhouse and then passed the pawnshop. As we continued walking, the lights grew dimmer and dimmer until we found ourselves in shadowy darkness. Bishop stopped us in front a tall chain-link fence that ran the length of the property.
After gazing around, I swallowed hard. I’d never had sex out in the open before, and I could feel my once firm resolve slowly fading. “Here?”
“It’s really the only place we can be alone with all the brothers being in from out of town. I gave up my room in the clubhouse.” A lustful gleam burned in Bishop’s eyes as he pulled me against him. I could feel the hardened length of him through his jeans. “But if you want, I’ll put you on the back of my bike and take you anywhere you want to go.”
Deep down, I knew it was right here and right now, or I was going to lose both my nerve and my buzz.I brought my arms up to wrap around his neck. “I just want to be with you.” I drew his head down to where our lips were almost touching. We stayed like that for a few seconds, both of our chests heaving and our bodies trembling. This was our figurative cliff, and we were just inches from free-falling off it. Before we could think any more about it, Bishop crushed his lips against mine.
For such a hardened, tough guy, his lips were so very smooth. They felt as soft as velvet as they moved against mine. I tightened my arms around his neck, drawing him as close to me as I could. My breasts strained against the bulging muscles of his chest.
I couldn’t seem to get close enough to him. I had to fight the urge to jump up and wrap my legs around his waist and grind myself against him. As his warm tongue entered my mouth, I moaned. He proved within seconds he was one hell of a kisser. He was also one for multitasking, because as his tongue caressed mine, his hand palmed my breast through the fabric of my dress. My nipple pebbled under his fingertips, and I gasped when he pinched it between his thumb and forefinger. While one hand continued to knead my breast, the other dipped below the hem of my dress. I sucked in a breath when it skimmed against my thigh before journeying farther upward. It had been too damn long since a man had touched me, and as Bishop’s hand cupped me, my head fell back, banging against the fence.
“Fucking hell. You’re drenched,” Bishop said in a ragged voice.
“I know,” I groaned. Gazing up at him, I said, “Please, don’t stop touching me.”
“Hmm, I like the sound of you begging.” His fingers began to work me over my panties, but I wanted more. I wantonly kicked my legs apart, spreading them as far as I could for him. Bishop read my mind by jerking my panties to the side and thrusting two fingers deep inside me.

“Oh yes!” I cried, moving my hips against his hand. At that point, I didn’t give two shits if anyone at the party could see or hear us. I just wanted to come.

Samantha Vargas witnessed something as a child. Something no child should ever have to see or endure. Something that has paved the road to where she is now as an adult. Samantha is an ATF (Alcohol, Tobacco & Firearms) agent and is given an assignment to go undercover with her partner to infiltrate the Hells Raiders MC.

Benjamin “Bishop” Malloy is a member of the Hells Raiders MC. He also works hard as a mechanic in hopes of one day opening his own shop. When he meets a new worker at his shop he realizes this new man is loyal and would be a great asset to the MC. Bishop takes this man under his wings without realizes that this guy isn’t who he claims to be.

Over the course of time Bishop struggles with his feelings for his new friends girlfriend. Their attraction to each other grows, and Samantha soon begins to realize that everything she thought about the MC world isn’t what it seems. But can she forgot her awful childhood and let her heart get in the way of taking down “violent criminals”?

When I read the two previous books I really grew to love Bishop so I was extremely excited to read his book, and Katie Ashely did not disappoint. Bishop was such an alpha, but could still be sensitive and sweet. It was the perfect balance of a male character.

LAST MILE had me laughing and then crying uncontrollably. The chemistry was electric and evident. Katie Ashely is a killer writer and I'm so extremely excited to see what she has coming next.