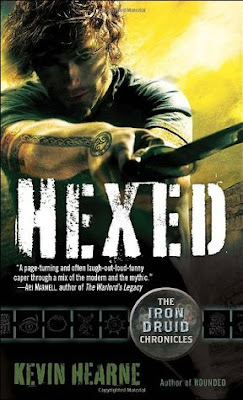 Atticus O’Sullivan, last of the Druids, doesn’t care much for witches. Still, he’s about to make nice with the local coven by signing a mutually beneficial nonaggression treaty—when suddenly the witch population in modern-day Tempe, Arizona, quadruples overnight. And the new girls are not just bad, they’re badasses with a dark history on the German side of World War II.

With a fallen angel feasting on local high school students, a horde of Bacchants blowing in from Vegas with their special brand of deadly decadence, and a dangerously sexy Celtic goddess of fire vying for his attention, Atticus is having trouble scheduling the witch hunt. But aided by his magical sword, his neighbor’s rocket-propelled grenade launcher, and his vampire attorney, Atticus is ready to sweep the town and show the witchy women they picked the wrong Druid to hex.

This is the second book in the Iron Druid Series.

At the beginning of Hexed, Atticus has decided to stay in the same city. He likes Tempe and he doesn't want to move again. He also wants to rebuild the earth that was destroyed during his last battle with Aenghus Og.

Soon after, Atticus decides to make a new alliance with the local coven to fight a new set of witches in town. The witches are targeting Atticus's friends/acquaintances and he won't let anything happen to them.

In the middle of all this, we also have a fallen angel, Coyote asking Atticus to take care of a problem; A rabbi and a priest asking too many questions; the cops not trusting Atticus's stories; a Goddess and the Morrigan fighting for power. The end result is multiple fights which involve our main hero.

As with its predecessor, Hexed has a lot of action, funny lines, and great characters. My favorites are Granuille, Oberon and the widow. I do like Leif (love the name 😁) and the werewolves. I'm not crazy about the witches and I'm not sure what to make of the cop yet.

“Brighid’s eyes flashed with a blue flame, and I wondered if she had learned to do that just so she could compete with the Morrigan’s red flashes. Maybe I should try to figure out how to make my eyes flash green so I could freak out the baristas at Starbucks. “No, you foolish mortal,” I’d say as my eyes glowed, “I ordered a nonfat latte.”