The Girl from Summer Hill by Jude Deveraux 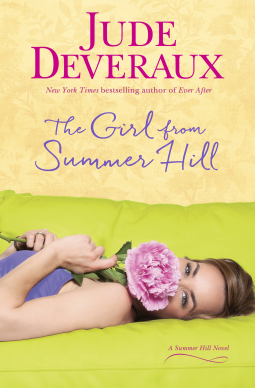 The first book of a new contemporary romance series set in the mountains of Virginia in a town with full of family legends, romance, and secrets from New York Times bestselling author of the Nantucket Brides trilogy.

Sparks fly as fiery Casey Reddick and brooding Hollywood actor Tate Landers clash in the Virginia summer heat. A chef who puts her career first and her love life second, Casey doesn’t see what every girl in town is swooning over. She made up her mind the moment she met Tate—he’s gorgeous, but stuck-up, nothing like his ex-brother-in-law, Devlin who’s playing the Wickham to Tate’s Darcy in local production of Pride & Prejudice. Casey makes the perfect Elizabeth Bennett—how could she be star-struck when she’s heard Devlin’s damning stories about Tate? As they rehearse together, however, Casey finds herself attracted to Tate—he’s much more down-to-earth than she expected and any physical contact between the two of them literally gives her a tingling, electric shock. As opening night draws near, Casey has some difficult decisions to make. Whom should she believe? The seemingly sincere, slighted Devlin or Tate, whose rough, arrogant exterior may only be skin deep. She’s come to love that jolt she gets when they touch—but will she get burned?

Casey Reddick used to work as a chef in a famous restaurant but now she is living in a small town, in a friend's guesthouse. She's doing what she can to contribute to the community's theater and their Pride and Prejudice play. She knows a Hollywood actor is coming to read the part of Darcy but the first time she meets him, he behaves badly when he mistakes her for a paparazzi.

Tate Landers is back in his estate home which has some painful memories too. He didn't want to come to the small town or read for the play but he has no other choice but to do that for Kit, his relative. To his surprise, he is intrigued by Casey. Although, he doesn't seem to do anything right in front of her. To his dismay, his ex-brother in law is showing an interest in Casey as well. He knows Devlin is not good news but he can't seem to do anything right around Casey.

I love Pride and Prejudice and anything to do with dreamy Darcy. Tate was dreamy too. He was a good guy who had a good heart. He made a few mistakes when he met Casey but Casey jumped to the wrong conclusions as well. I wanted to scream at them when they wouldn't listen to each other. Of course, it didn't help that Devlin was there to keep them apart. He was certainly an evil man.

I enjoyed the secondary characters and their love stories as well.


The first chapter of this book was hilarious yet cringe worthy. I felt a little uncomfortable with the situation, and I wanted to smack some sense into Casey! Casey eventually came to her senses, and I was grateful for that. Then I was able to sit back and enjoy the rest of the book.


The romance between Tate and Casey in this book was very similar to the romance between Mr. Darcy and Elizabeth. The romance made my heart flutter with joy. Tate was extremely swoon worthy once we got to know him. I loved getting to see behind his cold exterior. He did some dumb things, but I was able to forgive him. He was quite a dream boat.


Casey was a really funny main character. I really liked how spunky and outspoken she was. She was extremely straight forward, which made me uncomfortable at times. However, I admired that she spoke her mind, even if it was awkward. Casey would jump to her own conclusions a lot, which bothered me. She wouldn't listen to what Tate had to say, but Tate wasn't great at listening either. I just wanted them to hear each other out!


The cast of side characters were a great addition to this book. It took me a little bit to remember who was who, but I eventually grew to care for each character. I would love to see a book about every character from this book! It would be even better if their stories were inspired by other books by Jane Austen!


Some parts of the book felt a little slow or drawn out. I wanted to skip some chapters so I could get back to the exciting parts. However, as whole, I would say that this book was a page turner. I really enjoyed myself while reading this book.


Overall, this was a fun and romantic read. I would recommend this book to people who are in the mood for a light and funny romance.


*This ebook was given to me in exchange for a honest review. *

Casey is somewhat recently moved to town from the city and is finding her bearings after being a chef in a very well known restaurant. She is living in the back guest house of a property while the main house it unoccupied, or at least it was until she discovers one morning that the owner is in town when she sees him showering! Tate is a hollywood actor who is in town and has involvement in the theater production of Pride And Prejudice in Summer Hill. I love Tate and Casey's first meeting! I had no words and couldn't help but laugh. They don't get off to a good start and things continue to happen that hinder their relationship. Then there is Devlin and we all know who he is in this story...yeah that guy!

I absolutely loved the banter and playfulness of some of the characters and the all around atmosphere.   The story was so well put together and engaging. Darcey, The Bennets, Bingley, and Wickham are all there in this new creative twist of Pride And Prejudice.

Also, must read this with popcorn because it is highly entertaining!