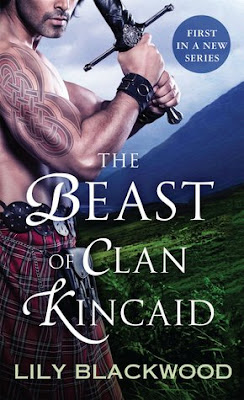 A Highland warrior battles to reclaim his birthright in the first of a new series filled with seduction, revenge, and soul-stirring passion…

They call him the Beast—a hardened mercenary whose heart seems as cold as his icy blue gaze. They do not know his true name: Niall Braewick, son of the Laird of Kincaid. It has been years since he escaped into the forest the night his father was murdered. Now he has returned, ablaze with a vengeful hunger. He will gain the MacClaren chief’s trust, gather his clan, and take back his lands. And take the MacClaren’s daughter as well…

Though he pulled her from the river, saving her life, Elspeth has been warned to keep her distance from her father’s hired warrior. He is a barbarian—a shame, as he is far more compelling than the lechers and fools competing for her dowry. Little does she know that, like the castle itself, she is a prize Niall intends to claim…but will he extract blood for blood and possess what is his, or will his enemy’s beautiful, innocent daughter tempt him to forsake his dream of conquest?

The first chapter of this book drew me in right away. I thought the author did a great job at creating a prologue that pulled me in and made me excited to read the rest of the book. I was looking forward to seeing Niall try to conquer his enemies and fall in love, but some parts of that fell flat for me.The romance was a little hard for me to get behind. I felt like the attraction between the characters had a major case of insta-lust. In the case of this book, it didn't work for me. I thought the romance felt rushed. I wanted it to be a slower burn, especially because of the history Elspeth and Niall's families have with each other. I thought the romance kind of made the book feel slow at times, because the romance didn't feel extremely genuine. At times, the romance almost felt repetitive. I thought Elspeth's inner dialogue on her relationship with Niall seemed realistic, but I thought she was way too forgiving. I don't want to spoil anything, but I thought she should have been angrier at Niall for longer after something that happened in the book. Niall's feelings for Elspeth felt overwhelming and they ended up feeling unrealistic. All that being said, Niall and Elspeth did have some sweet moments and they had intense chemistry!As main characters, I thought Elspeth and Niall were good main characters. My only real complaints about them were their feelings for each other, which I talked about earlier. Other than that, I liked them! I loved how fierce and badass Niall was. I liked how kindhearted and sweet Elspeth was. I enjoyed being inside their heads. I also really liked the cast of side characters. I am hoping to learn more about them in future books!Overall, this was an enjoyable book, especially for a debut novel! The only main issue I had with this book was the romance that felt rushed and a little hard to believe. I would have liked the romance to have developed at a slower pace. I thought the author's writing flowed well and I enjoyed the world she created. The characters were all interesting, and I am excited to see where the author takes them.