The Ghost by Monica McCarty 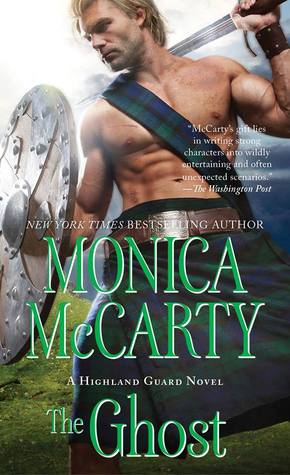 Joan Comyn swore allegiance to Robert the Bruce the day she witnessed England’s barbarous king torturing her famous mother, Scot patriot Bella MacDuff. Now the mysterious beauty slips into men’s hearts like a specter and entices England’s most illustrious barons to unwittingly divulge their secrets, then shares them with her king. Known only as the Ghost even among her Highland Guard brethren, Joan has become the most wanted spy in England.

The man determined to uncover her identity poses her biggest threat yet. Alex Seton once stood with Bruce but now fights for the enemy. Though Joan knows she must avoid the handsome warrior or risk discovery, his knightly chivalry touches a place in her long since buried. When his suspicions grow apparent, Joan realizes she must do everything in her power to stop Alex from revealing her mission and convince the powerful fighter to join forces with the Highland Guard once more. But as the ultimate battle in the great war approaches, will Alex chose love or honor?

I couldn't wait to get my hands on The Ghost. I love how Monica McCarty is able to mix history with fiction. When I'm reading her books I'm transported to the time period and experiencing their ordeals.

I was sad to learn this book was the end to the series but I can tell you that I'm very pleased with the outcome.

I was surprised a lady turned out to be the Ghost but after thinking it through, it made complete sense. Joan Comyn was daring and loyal to the Bruce's cause. She wanted to decimate the people who had hurt her mother, Bella MacDuff, years past. As the spy for the Highland Guard, she was determined to do anything in her power to get the information the Bruce needed. It didn't matter that she was risking her own life every time she approached the English men.

Alex Seton was trying to do the best he could to stop a war between Bruce and the English. Alex was half English and had the blood of a knight. He left the Highland Guard because he disagreed with their methods. Raiding and killing was not want he wanted to do. By joining the English, he was  just trying to achieve piece.  However, when Joan's life is in danger, he wanted nothing else than to save her. She was everything to him and he was ready to fight for her, even if she was the spy he was trying to uncover.

The Ghost is the perfect combination of historic facts and intrigue. Both characters are likable. Alex was sincere, honorable and a perfect gentleman. Joan was daring, smart and loyal. I couldn't be happier with the epilogue.

I wonder what is next for Ms. McCarty.