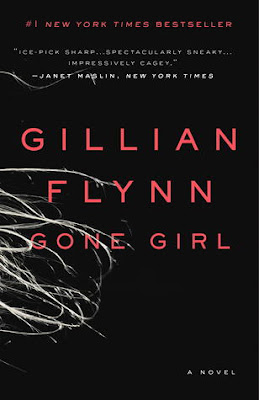 On a warm summer morning in North Carthage, Missouri, it is Nick and Amy Dunne’s fifth wedding anniversary. Presents are being wrapped and reservations are being made when Nick’s clever and beautiful wife disappears. Husband-of-the-Year Nick isn’t doing himself any favors with cringe-worthy daydreams about the slope and shape of his wife’s head, but passages from Amy's diary reveal the alpha-girl perfectionist could have put anyone dangerously on edge. Under mounting pressure from the police and the media—as well as Amy’s fiercely doting parents—the town golden boy parades an endless series of lies, deceits, and inappropriate behavior. Nick is oddly evasive, and he’s definitely bitter—but is he really a killer?

I just finished Gone Girl and the only thing I could think of was :What a pair of psychos!.

The first part of the novel was too slow for me but the second part had me hanging onto every word.
In the end, I was sure they deserved each other. They were certainly messed up. Two of  a kind.

For those who have not read this book, or seen the movie (which now I can finally watch) Nick is accused of his wife's disappearance on their fifth anniversary. Many clues to her disappearance lead to Nick.

Nick is not the usual husband. He doesn't seem distraught from her disappearance. He doesn't react the way a husband who has a clean conscience does. Maybe it's because he's not innocent?  Of course, nothing is more damning for Nick than Amy's diary.

In regards to Amy, she's a strange woman. She's methodic and a perfectionist. Through her diary, we found out how Nick has fallen out of love with her. Her life changed when they both lost their jobs in NYC and moved down south to take care of Nick's dying mother. Amy doesn't want to move but Nick doesn't care. This is the beginning of the end.

What can I say about Gone Girl that has not been said before?

Probably nothing new. It was twisted and provocative. The characters were unlikable, self-centered, egomaniacs and crazy but I must be twisted too since I ended up liking them.