Fly With Me
by Chanel Cleeton 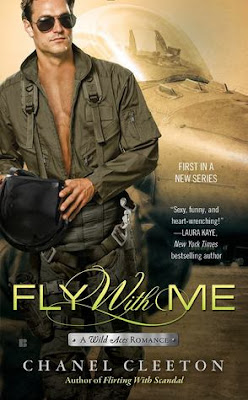 
From the author of the Capital Confessions Novels comes the first in the steamy Wild Aces Romance series.
U.S. Air Force fighter pilot Noah Miller—call sign Burn—loves nothing more than flying hard and fast. When he meets a gorgeous and sassy woman while partying in Las Vegas, he immediately locks on to her.
Jordan Callahan owns a thriving clothing boutique, but her love life is far less successful. Her luck changes when six feet, two inches of sexy swagger asks her to dance and turns her world upside down.
One scorching weekend becomes an undeniable chemistry that they can’t leave in Vegas. But the long distance relationship and their different lives threaten to ground their romance. And when the dangers of Noah’s job become all too real, Jordan learns being with a fighter pilot means risking it all for a shot at love…

At her sisters bachelorette party in Vegas, Jordan Callahan meets the chupacabra of men, fighter pilot Noah Miller. The spark is intense and instant.

Even though I didn’t fully connect with this novel, I still really enjoyed it. Jordan and Noah had that once-in-a-lifetime meeting which led to a whirlwind of a romance. I love stories about those random encounters that change your life! But for me, something was still missing that made me unable to fully connect with their story.

Chanel Cleeton does a wonderful job at creating lovable and intriguing secondary characters and I’m dying for the next books! I have so many questions that need to be answered!

FLY WITH ME was a really good, solid novel. It was original and definitely worth picking up!

Vegas is the city where the unexpected happens. Jordan is in town for her sister's bachelorette party and has an encounter with the sexy fighter pilot Noah, they are instantly memorized by each other and end up spending the rest of her stay together, but when it's time for the party to end neither one of them wants to let go.

Noah and Jordan live in different states, but want to make the effort to make something work. As the relationship transforms into something serious, Jordan being a civilian tries to come to grips with the chaotic military life. Noah commits to Jordan, but what Jordan soon realizes it that his commitment to his country comes first before anything else.

I'm a complete sucker for a military romance and Fly With Me swept me away. I love how she made me fall in love with not only the lead characters, but also with the secondary characters! I good start to this series.