Dear Heart, I Hate You by J. Sterling

New York Times Bestselling author J. Sterling brings readers a tantalizing tale of love and redemption in her newest contemporary romance DEAR HEART, I HATE YOU. Be sure to check out the snippet below, enter the giveaway, and grab your copy of this amazing book today! 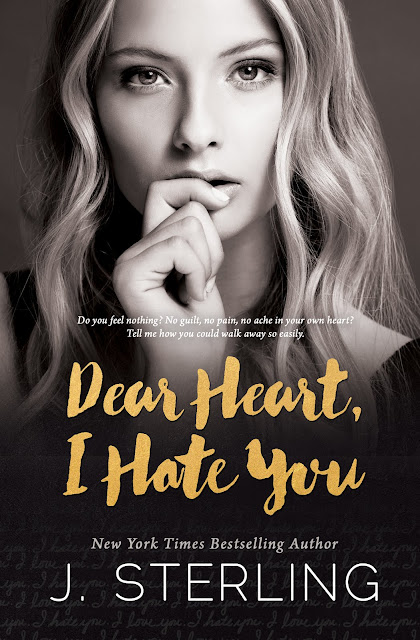 I didn’t plan on him.
Or for him.
Or anything that had to do with Cal Donovan from Boston.
Meeting him had been a complete and utter surprise, taking me one hundred percent off guard. I met new people every single day in my line of work and none of them affected me. Wasn’t that the way of things though? You could meet a thousand people and they’d all mean nothing to you. But then you’d meet that one and they suddenly meant everything. 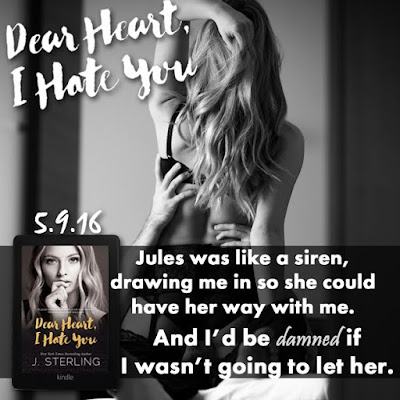 I didn’t plan on him. Or for him.
Or anything that had to do with Cal Donovan from Boston.
Meeting him was a surprise, taking me one hundred percent completely off-guard. I met new people every day in my line of work, and none of them affected me. Wasn’t that the way of things, though? You could meet a thousand people and none of them would mean anything to you, but then you’d meet one, and suddenly they meant everything.
I was a self-professed workaholic, so everyone in my life knew I didn’t date. It wasn’t entirely intentional on my part; I just didn’t make men a priority at this point in my life. But that wasn’t to say that if I met someone who intrigued me, I wouldn’t give it a shot. Because I absolutely would. But therein lay the rub—very few guys sparked my interest and managed to hold it.
And that was perfectly fine with me. Work came first, and I wasn’t about to apologize for that or feel bad about it. Not even to my ex-boyfriend Brandon, when he broke up with me over two years ago because I spent too much time at the office, and he felt I should have been focusing at least a smidgeon of my time and attention on him.
He had played the role of the supportive boyfriend at first, telling me how proud he was of my ambition and accomplishments. But all the while, his resentment secretly brewed until it exploded from him one night as we sat in his living room. To say I’d been taken off-guard and shocked by his anger would be an understatement. I had no idea he’d grown so spiteful.
Brandon hadn’t been entirely wrong in his frustrations, but even his leaving didn’t make me want to change my priorities. All I’d felt when he was breaking up with me, delivering a speech he’d clearly practiced more than once, was a sense of relief. My heart leaped at the idea of focusing on my career without taking anyone else’s desires or feelings into consideration. Oh, the freedom I looked forward to experiencing and the complete absence of guilt.
Yes, that might sound harsh, but I wanted to build a name for myself in the high-end real estate market, and I couldn’t do that by dividing my time. Or maybe I could have. The point was that I didn’t want to, and Brandon reminded me of that.
Besides, when did making yourself your number one priority become such a horrible thing? Men focused on their careers all the time, and that was completely acceptable. But not for a woman; not for me. I learned fairly quickly after the Brandon breakup that men didn’t like being second on a woman’s priority list. And they seemed to be intimidated by a motivated female, calling me things like hard to handle, challenging, anddifficult.
The end result was that being single seemed to work best for me, and I had no plans to change my relationship status anytime soon.
Then I met Cal.


And he f*cking ruined everything. 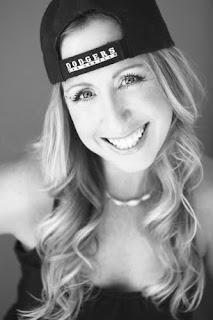 I got fired from my last job.
It's true.
I know you're sitting there thinking, "Jenn, how could anyone in their right mind fire someone like you?" And I'd love to give you a good reason, but the truth is that sometimes being all sorts of awesome isn't fun for other people. They don't always tend to like it. lol
So I picked my pride off the floor, bought a laptop and started writing my first book. And you know what I realized? Writing stories that meant something to me was a million times better than working my ass off for someone who didn't really care about anything other than the bottom line.
My soul has never felt more satisfied.
My heart has never been more full.
I've never worked so hard in my life, but I love every second of it. I truly do.
It is SO worth it.
All of it.
Every moment.
The journey it took to get to this point- I wouldn't change a thing.