The last book in Carrie Ann Ryan's bestselling Dante's Circle series is here - PROWLED DARKNESS is available now! Be sure to get your hands on Eliana and Malik's incredible story now. 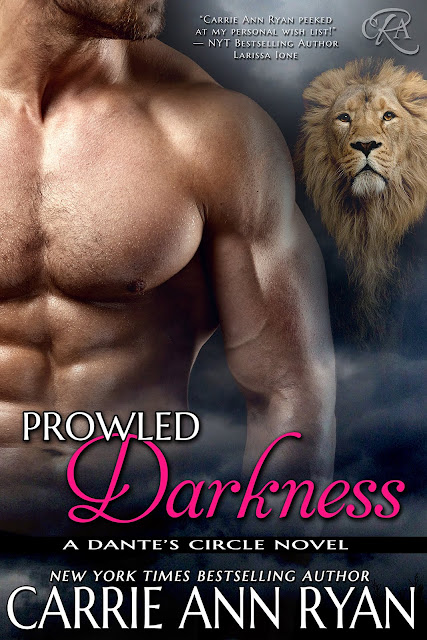 Humans aren’t as alone as they choose to believe. Every human possesses a trait of supernatural that lays dormant within their genetic make-up. Centuries of diluting and breeding have allowed humans to think they are alone and untouched by magic. But what happens when something changes?
Eliana Sawyer’s life was rocked from its foundation twice in as many years. She risked her heart and had it shattered into a thousand pieces when Malik left her with no warning. While she’d normally raise her chin and ignore the pain, she can’t forget what he gave her before he disappeared from her life.
Malik Ward is a prince amongst the lion shifters and knows that one day he will have to take a mate. Only, his people can never mate with humans. Under the mistaken impression that Eliana was only human, he forced himself to leave before they’d crossed a line and he broke his vow to his people. Now that he knows the truth about Eliana, however, it will take more than groveling to win back the one woman fated to be his.
While Eliana and Malik embark on a new sensuous path that might lead to disaster, the realms aren’t ready to allow the final lightning-struck human to be enveloped into their fold. The couple will have to combat those plotting against them, as well as the broken promises and heated emotions they share.
Warning: Contains a Leo with a bite that’s worse than his roar, a woman with one last chance at the life she’s always dreamt of, a flame that could extinguish with the wrong sacrifice, and the final journey in the bestselling Dante’s Circle series.

Get your hands on PROWLED DARKNESS:

“I need to speak with Malik. Alone.”
She made a move to stand up, and he took a step toward her, needing to help, but stopped as a tall and slender man made it to her first. The other man glared over his shoulder at Malik as he put his hands on Eliana’s arms.
“Thank you, Seth,” Eliana whispered.
Seth. This was Tristan’s mate, or at least one of them. That meant Malik didn’t have to rip the man’s arms off for daring to touch Eliana. He tried to keep his temper in check, fisting his hands at his sides and breathing through his nose. He had no right to feel this way, no right to fuck everything up once more. But it seemed the predator in him was ready to claim the woman in front of him. Hell, he’d been ready when he’d thought Eliana was human.
As lions couldn’t mate with humans, he’d walked away.
Hopefully, Eliana would listen to him, would forgive him.
But he wouldn’t grovel. He would one day be Leo and a Leo didn’t beg.

Have you always wanted to know what kind of paranormal you'd be from Carrie Ann Ryan's Dante's Circle series? Now you can find out! Take the quiz here - we'd love to see your results!

New York Times and USA Today Bestselling Author Carrie Ann Ryan never thought she’d be a writer. Not really. No, she loved math and science and even went on to graduate school in chemistry. Yes, she read as a kid and devoured teen fiction and Harry Potter, but it wasn’t until someone handed her a romance book in her late teens that she realized that there was something out there just for her. When another author suggested she use the voices in her head for good and not evil, The Redwood Pack and all her other stories were born.
Carrie Ann is a bestselling author of over twenty novels and novellas and has so much more on her mind (and on her spreadsheets *grins*) that she isn’t planning on giving up her dream anytime soon.

Want to win a $25 Amazon giftcard and a swag pack? Enter via the Rafflecopter below!