Breakfast With Neruda by Laura Moe 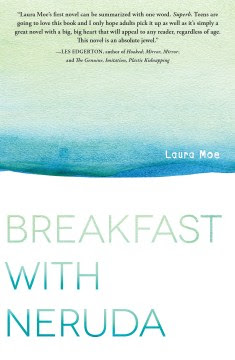 Michael Flynn is just trying to get through his community service after he made the dumb decision to try to blow up his friend's car with fireworks--the same friend who stole Michael's girl. Being expelled and losing his best buddy and his girlfriend are the least of his problems: Michael has learned to hide everything, from his sick hoarder mother to the fact that he's stuck living in a 1982 Ford LTD station wagon he calls the Blue Whale. Then one day, during mandatory community service, he meets Shelly, a girl with a past, who's also special enough to unmask Michael's deepest secrets. Can he manage to be worthy of her love, a guy living in a car, unable to return to his chaotic and fit-to-be-condemned home? Shelly won't give up, and tries to peel back the layers of garbage and pain to reveal Michael's immense heart.

My whole life I have searched for him in the shadows and the bright sun, searched for him in coffee shops and bookstores and gas stations. I conjured him in the black-haired dishwasher at Bob Evan’s restaurant, and believed I saw him in the spaghetti aisle of the grocery store. Scenarios of our meetings roll through my head like a film where I imagine him lumbering toward me with the slightly askew gait I inherited (I don't walk like Jeff or my mother), his arms spread out to welcome his long lost son. At the pool he taught me how to dive and swim, and later, on vacation, we went to the beach where he taught me how to body surf. I envisioned meeting him at the circus, where he took my hand and bought me a bunch of balloons. In another film, he carried me on his shoulders at a county fair. He and I bowled together at Main Lanes and ate ice cream in Graham Park. My father played catch with me in the backyard of his sprawling home, the one with the pool and a pair of well behaved golden retrievers. He bought me Christmas presents and threw birthday parties for me, sparing no expense. My father introduced me to his co-workers, saying proudly, “Here’s my boy. Someday he’ll be running this company.” He told me bawdy jokes and said I was going to be a “lady-killer,” and showed me how to shave without cutting myself. He instructed me on how to treat a lady on a date, and how to tie my tie and wear cologne. He coached me in softball and football, and cheered at every game.
But none of this is true, and in every film, he has no face. He has no name. Because I have no name. I am not who I imagine I am. I am nobody.
That’s my biography: the boy with no name.

A high school teacher and librarian, Laura Moe is a published poet (in journals included Mischief, Caprice, and Other Poetic Devices), but her great love is fiction. This is her first novel.