We are over the moon excited to bring you the Release Day Launch for Jennifer L. Armentrout's WICKED! WICKED is a New Adult Paranormal Romance and the first book in Jennifer’s Wicked Trilogy! 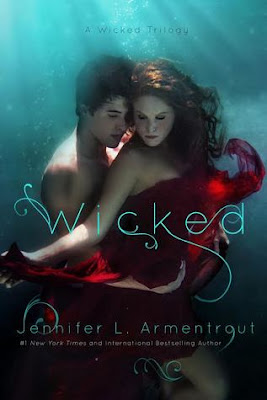 
Things are about to get Wicked in New Orleans.
Twenty-two year old Ivy Morgan isn’t your average college student. She, and others like her, know humans aren’t the only thing trolling the French Quarter for fun… and for food. Her duty to the Order is her life. After all, four years ago, she lost everything at the hands of the creatures she’d sworn to hunt, tearing her world and her heart apart.

Ren Owens is the last person Ivy expected to enter her rigidly controlled life. He’s six feet and three inches of temptation and swoon-inducing charm. With forest-green eyes and a smile that’s surely left a stream of broken hearts in its wake, he has an uncanny, almost unnatural ability to make her yearn for everything he has to offer. But letting him in is as dangerous as hunting the cold-blooded killers stalking the streets. Losing the boy she loved once before had nearly destroyed her, but the sparking tension that grows between them becomes impossible for Ivy to deny. Deep down, she wants… she needs more than what her duty demands of her, what her past has shaped for her.

But as Ivy grows closer to Ren, she realizes she’s not the only one carrying secrets that could shatter the frail bond between them. There’s something he’s not telling her, and one thing is for certain. She’s no longer sure what is more dangerous to her—the ancient beings threatening to take over the town or the man demanding to lay claim to her heart and her soul.

He left me standing there as he disappeared into the bathroom, and I tried to make sense of what just happened. All I knew was that the punch-in-the-chest sadness that came whenever I thought of Shaun wasn’t there. And I didn’t know what to make of that.
Or anything.
Taking a deep breath, I put my clothes on his dresser and all but dashed into the bed, and good Lord, the mattress was comfy! I scooted to the middle and froze, having no idea what side he slept on or if he had a side. I totally had a side—always the furthest away from closet doors because I was a dork. Straightening the shirt out so my undies weren’t saying hi to the world, I tugged the blanket up to my hips and lay flat on my back.
I so needed an adult to explain to me what the hell I was supposed to do from this point on.
There wasn’t much time to stress over it because Ren returned from the bathroom. His ever-present half grin spread as he saw me. I clutched the blanket, my breath caught in my throat. My heart pounded so fast that I wondered if I was going to have a heart attack, and God, wouldn’t that be embarrassing. I swallowed nervously and willed my heart to slow.
Turning off the lamp, shadows fell around Ren, but when he faced me, I could tell that he’d frozen. I couldn’t make out his expression as he bent, taking a hold of the covers on his side.
“Ivy?”
“Hmm?”
He slowly edged the covers back from his side and climbed in, and although I couldn’t make out his eyes, I knew he was watching me. “I’m happy that you’re here.”
My fingers eased off the blanket.
As he stretched out beside me, my eyes adjusted to the lack of light, and I could see that he was smiling. “Are you?”
“Yeah,” I whispered.
“Good. That’s all I wanted to hear.”
Wow, the warmth that flooded my chest could’ve turned me into a puddle of goo in that bed. I waited for him to make a move on me, but seconds ticked by. He seriously was behaving himself. I dared a quick peek at him, and found I could not look away.
Ren lifted his arm closest to me, and a heartbeat passed. I hesitated for a moment, and then, my heart pounding even more, I slid over until my leg brushed his. He curved his arm around my waist and drew me up against his side, guiding me down until I was nestled against his warm, bare chest. Another moment passed and then I lowered my cheek, and the simple pleasure of lying like this nearly broke me right open.

# 1 NEW YORK TIMES and USA TODAY Bestselling author Jennifer lives in Martinsburg, West Virginia. All the rumors you’ve heard about her state aren’t true. When she’s not hard at work writing. she spends her time reading, working out, watching really bad zombie movies, pretending to write, and hanging out with her husband and her Jack Russell Loki.
Her dreams of becoming an author started in algebra class, where she spent most of her time writing short stories….which explains her dismal grades in math. Jennifer writes young adult paranormal, science fiction, fantasy, and contemporary romance. She is published with Spencer Hill Press, Entangled Teen and Brazen, Disney/Hyperion and Harlequin Teen. Her book Obsidian has been optioned for a major motion picture and her Covenant Series has been optioned for TV.