Today we have the release day launch of Freya Barker's Hundred to One!! I'm so excited about this book. Freya is sharing a few exclusive teasers with us, as well as a fantastic giveaway, so be sure to read all the way down!!!

Arlene Bowers is as tough as nails. She has survived a less than perfect marriage, managing to move past it to run her own diner. Her abrasive exterior has always been a way for her to hide behind the darkness and pain that she has endured, but a recent, violent attack and several disturbing phone calls have that tight hold on her emotions wavering. Seb Griffin showed up in Cedar Tree eight months ago and was hired on at Arlene's Diner as a cook. An ex-con with secrets of his own, Seb walks a fine line. Since he began working at the diner, he's developed feelings for his fierce, stubborn boss, and the need to keep his distance from her, to protect her, is a daily struggle. When it appears that Arlene's past has come back, rearing its ugly head while her defenses are low, Seb steps up and claims responsibility for Arlene, praying that he can keep her safe from whatever is coming her way.

Other books in the Cedar Tree Series:
Slim To None 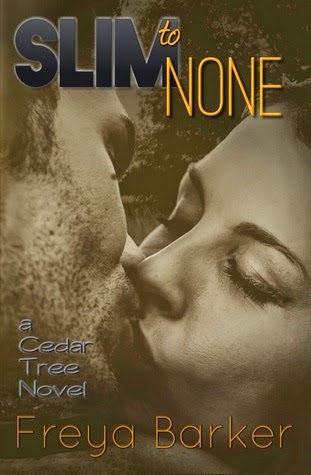 Buy Now
Slim to None

Freya Barker has always been creative. Involved in music and dance when she was younger, she followed it up with cake design, quilting, and has most recently added cover design, the Dutch-born Canadian mother of two now has found her voice - writing. Freya Barker is the pen name for a well-respected reviewer/blogger, who has a strong following on her blog, Facebook and Goodreads. As an avid reader, the next step to pen a book of her own seemed natural. Driven to make her story about 'real' people, Freya writes about people who are perhaps less than perfect, but just as deserving of romance, hot monkey sex and some thrills and chills in their lives!

Giveaway
Enter Freya's giveaway!!
a Rafflecopter giveaway
Posted by MrsLeif at 8:00 AM

Email ThisBlogThis!Share to TwitterShare to FacebookShare to Pinterest
Labels: Review Cedar Tree, Freya Barker, Hundred To One, Release Day Launch, Slim To None