Cover Reveal
A Veil of Glass and Rain by Petra F. Bagnardi 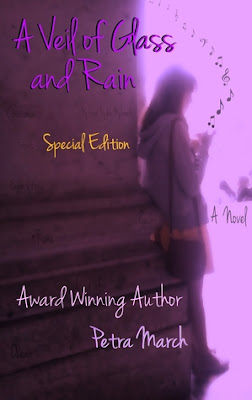 Brina and Eagan meet for the first time when she's nine and he's fourteen. They like each other from the very beginning, though their bond isn't immediate, but it grows over the years. What links them is the fact that their parents are photographers and are extremely devoted to their work and to each other; so much so that both Brina and Eagan have to learn how to take care of themselves from a very young age. Despite their differences, age, gender, nationality - Brina is Italian and Eagan is American - they find comfort in their growing friendship.
Then Brina becomes a teenager, and her feelings for her friend start changing and deepening. New desires stir within her. As soon as Brina realizes how those feelings complicate her friendship with Eagan, she runs away from him.  A few years later, Brina is twenty and Eagan is twenty-five, they find one another once again.


Publisher's Note: This is a fully re-edited and enriched with new and special contents version of the previously published novel, A Veil of Glass and Rain, by Petra F. Bagnardi (aka Petra March).


Add to Your Goodreads Shelf

A stolen kiss...
[...]I was wearing a yellow sundress and clutching the handle of my guitar case. Eagan offered to carry it for me, but I shook my head, for he was already bearing the weight of his huge backpack.

A part of me was glad he hadn't been able to hear me play. The piece I had chosen was an acoustic cover of one of my favorite rock songs. The acoustic version was utterly sentimental; it expressed perfectly the way I felt about Eagan. After my performance, all my professors and fellow students admitted that they'd never heard me play with so much feeling. I wasn't certain I wanted Eagan to discover that part of my soul yet.

We embraced awkwardly. I noticed that his eyes were red and tired. I also remarked that he was tanned and that he smelled good, as always. Of course, I didn't reveal my sentiments.

It was a bright summer day. We went to a park, we sat, we didn't talk much. After a while, Eagan lay back and fell asleep.

I watched him rest for a few moments, then I reclined alongside him. I placed my body very close to his, so that I could feel his heat through the thin cotton of my dress. His handsome face was turned toward me and his lips were slightly parted. Flecks of gold dotted his beard stubble and his dark blond hair.

I braced one of my hands on his arm and the other one on his muscled chest, then I leaned toward his face, keeping my eyes open. I let my mouth linger over his and breathed his breath then, finally, I whispered a kiss across the side of his mouth, then I licked his upper lip. I waited. He didn't stir. So I closed my eyes and brushed his lips with mine once more. I became greedy. My tongue pressed between his parted lips and stroked his tongue once, twice and then again until I moaned and an unbearable ache surged between my legs.

My fingers gripped his sweaty T-shirt. I kept kissing Eagan until he groaned softly in his sleep.

“I love you,” I murmured against his lips.

I moved away from him. I forced myself to stand, I grabbed my guitar case and I left.

On the bus, I kept licking my lips; I tasted him, the salt of his sweat, and a hint of cinnamon.
(A Veil of Glass and Rain: Special Edition, by Petra March)

Petra March (aka Petra F. Bagnardi) studied Screenwriting and History of American Cinema at UCLA and NYU. Presently, Petra keeps traveling and dreaming through her novels. Her characters are deeply in love with Europe and the USA, just like Petra is.

On October 2nd 2014 her debut novel, A Veil of Glass and Rain, won the Indie Book of the Day Award.