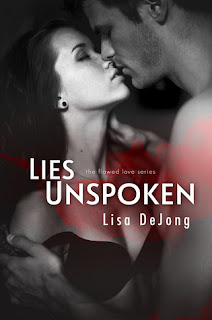 I tried hard not to fall for the bad guy.

My new roommate, Blake, is a jerk—an unemployed artist with a chip on his shoulder. I can’t stand him unless his hands are on me. He makes me desperate for him, and everything he makes me feel.

And then there’s my new boss, Pierce--successful, charming, and extremely good-looking. He goes after what he wants, but what does he see in me?

I try to stay away, but I end up in the arms of exactly who I was hiding from. And when I find out what’s being hidden from me, my heart twists in ways it never should.

I thought I knew him.
I didn't.
The way he kissed me.
The way his hands traveled every inch of my skin.
I thought it meant something, but as it turns out, it was all lies unspoken.


"I want what every woman wants . . . to feel wanted."
A story full of hidden truths and two very different guys. I found myself torn between them!
Lila was all set to walk down the aisle, until her fiancé broke her heart. Determined to leave behind the painful memories, she heads to Chicago for a fresh start. Her plan is to take advantage of her friend's empty apartment until she can afford a place of her own. Well, it was supposed to be empty. Her friend failed to mention her moody brother, Blake would be living in the next room. Right from the start, their relationship is tense.
Lila was lucky enough to sit next to a hot CEO, Pierce Stanley on the plane ride to Chicago. He sort of promised her an interview for an interior design position. Her dream career. But for some reason, she doesn't have the confidence in herself to follow-up with him on her own. Instead, knowing she needs to start saving money for her own place, she takes a waitressing job in a bar.
Just so happens to be a place that Blake frequents. He's rude and gruff most of the time, but he becomes pretty protective of her. There's a different, almost sweet side to the tortured artist and it's not long before sparks are flying. They're up against-the-wall, no-holds-barred, hot! He makes it pretty clear though that what they have is purely physical, not a relationship. It starts to wears on Lila that one minute Blake is totally into her and the next he's just cold, pushing her away and disappearing for days with no explanation.
"He wants me, then he doesn't. He makes me believe that he's everything, then he's nothing at all. He tells me all the things I want to hear, then takes it all back."
It's sort of unexpected when, Pierce contacts her to let her know an apprenticeship has opened up in the design department of his firm. He wants her to come and interview with him, right away. Of course, he offers her the job but Lila can't help but to wonder if he's hiring her for the wrong reasons. There's something in his eyes that tell her he wants more. He's sexy, sweet and would easily make any girl happy. Only leaving Lila more confused.
"When you're lying in bed tonight - thinking - remember that I'm here and he's not."
While there is a love triangle aspect to the story and some major secrets, Lila does ultimately make her choice. But, not before leading one of them on for quite a bit first, so be prepared. It's kind of hard to watch because both guys are so great, just in different ways. One minute I was rooting for Blake and the next I was giddy over Pierce! She knows who her heart belongs to, but it doesn't mean she's going to get what she wants. There is one heck of a cliffhanger! I'm really looking forward to the next book.

*Complimentary copy provided by the author in exchange for an honest review.*