We are extremely excited to tell you that Robin York's DEEPER has finally been released! DEEPER is a New Adult contemporary romance being published by Random House’s Bantam imprint and is the 1st novel in Robin York’s Caroline and West Series. This book is an absolute must read! 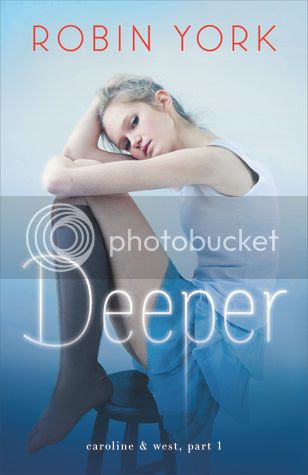 In this New Adult debut by Robin York, a college student is attacked online and must restore her name—and stay clear of a guy who’s wrong for her, but feels so right.

When Caroline Piasecki’s ex-boyfriend posts their sex pictures on the Internet, it destroys her reputation as a nice college girl. Suddenly her once-promising future doesn’t look so bright. Caroline tries to make the pictures disappear, hoping time will bury her shame. Then a guy she barely knows rises to her defense and punches her ex to the ground.

West Leavitt is the last person Caroline needs in her life. Everyone knows he’s shady. Still, Caroline is drawn to his confidence and swagger—even after promising her dad she’ll keep her distance. On late, sleepless nights, Caroline starts wandering into the bakery where West works.

They hang out, they talk, they listen. Though Caroline and West tell each other they’re “just friends,” their feelings intensify until it becomes impossible to pretend. The more complicated her relationship with West gets, the harder Caroline has to struggle to discover what she wants for herself—and the easier it becomes to find the courage she needs to fight back against the people who would judge her.

When all seems lost, sometimes the only place to go is deeper.

Meet West (from Caroline’s POV)
West’s eyes go wide. “Jesus, Caroline, did I hit you?”
He stands, stepping close, reaching for me. It’s as if he completely forgets he’s beating the shit out of Nate, and he just comes for me. The look in his eyes, the outstretched hand—it’s so much like the first time West reached for me, more than a year ago, that I have a moment of déjà vu. My knees buckle, which annoys me. My body is the enemy right now—my incompetent knees, that noise my throat decided to make, my leaking nose, and the pounding pain in my face.
Not to mention my heart, which is trying to escape my chest by flinging itself violently against my ribs.
West’s hand lands on my waist, steady and firm, and it’s stupid. My body is stupid. Because his hand feels kind of awesome.
Obviously I’m concussed. West is the one who hit me, probably, and he’s definitely the one who hit Nate, who—
Fuck.
Nate is sprawled out on the floor, bleeding from the mouth.
Worse, I can’t really bring myself to focus on Nate, because West’s other hand landed on my shoulder briefly, and now he’s lifting my chin. The blood makes his fingers slippery. I’m bleeding on him. And I like it.
This happens with West. He’s only touched me once before, but it isn’t the kind of thing a girl forgets.
God, there are so many, many reasons this is not good, though. Most of them aren’t even health-related. For starters, I’m not into guys who punch people. I’m not into guys at the moment, period. And if I were, I wouldn’t be into West, because West is trouble, and I’m allergic.
“You’re bleeding,” he says.
“You hit me.”
“Let me see.”
He tugs at my wrist, and I let him drag my hand away from my nose, because basically I will let West Leavitt do anything. It’s possible that he’s some kind of magical creature. I mean, he’s not. I know he’s not. He’s a twenty-year-old sophomore at Putnam College, majoring in biology. He shelves books at the library, waits tables on weekends at the Gilded Pear—which is the only fancy restaurant in Putnam—and works the overnight shift at the bakery in town. All that on top of at least a couple of shady, unofficial sources of income, plus classes, makes him a busy guy.
He’s tall—around six feet, maybe a little taller—with messy brown hair, light blue-green eyes, and a great tan.
He’s a guy who goes to my college. That’s all.
But that is not all.
His face is . . . You know how they say human beings are more attracted to symmetrical faces? Well, West’s face is slightly off in every conceivable way. One of his eyebrows tilts up a little bit, and the other one is bisected by a thin white scar. His eyes are a color that isn’t actually a color, with these tiny little flecks that sometimes look shiny, and I don’t understand how that’s possible. His mouth is wider than it ought to be, which makes him look like a smart-ass every time he smiles or almost smiles or thinks, vaguely, about smiling. His nose must have been broken once—or maybe more than once—because it’s not quite where it’s supposed to be. It’s shifted a titch to the left. And honestly? I think his ears are too small.
When he looks right at me, I can barely make words.
That’s why I’m standing here, bleeding, letting him inspect my nose.

Robin York grew up at a college, went to college, signed on for some more college, and then married a university professor. She still isn’t sure why it didn’t occur to her to write New Adult sooner. Writing as Ruthie Knox, she is a USA TODAY bestselling author of contemporary romance, including RITA-finalistsAbout Last Night and Room at the Inn. She moonlights as a mother, makes killer salted caramels, and sorts out thorny plot problems while running, hiking, or riding her bike.