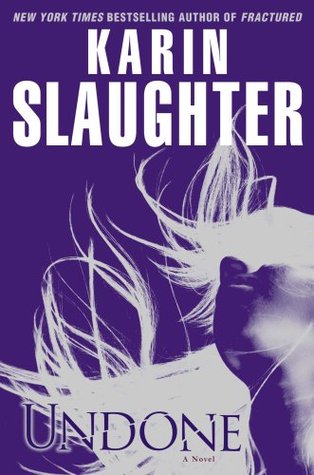 When a tortured young woman enters the trauma center of an Atlanta hospital, Dr. Sara Linton is thrust into a desperate police investigation with Special Agent Will Trent and his partner, Faith Mitchell. Though guarding their own wounds and their own secrets, Sara, Will, and Faith find that they are all that stand between a madman and his next victim.

Undone is the third book in the Will Trent series.

Will Trent and his partner Faith Mitchell are part of the GBI. When the book begins, Faith had passed out and she has been taken to the ER. Here is where Will will meet Sara Linton for the first time.

Sara Linton was the main protagonist from Karin Slaughter's Grant series. She's a pediatrician as well as a coroner back in Grant County. In Undone, she has moved to Atlanta and is working as an ER doc. Something horrible happened to her 3 1/2 years ago and she needed a change of scenery. She's still healing.

“And now, when she looked in the mirror and saw a new line on her own face,a new wrinkle, all she could think was that she was growing old without him”

At the same time that Faith is in the ER, a woman is brought in. She was hit by a car but a lot more has happened to her before the car accident. What she has suffered turns her into a GBI investigation. A serial killer is on the loose and Will, Faith, and Sara will all be involved in the investigation.

Another amazing book in the Will Trent series. It has become one of my favorite series. The character development is extensive and thoughtful.

My thoughts on the main players:

Will---> So damaged. His past has marked him and despite being a smart man he has many vulnerabilities. One his wife loves to exploit.

“Who’s Sara?”
“Sara Linton,” Faith said. He shrugged, and she studied him carefully. Will never forgot names. He never forgot anything. “The doctor from yesterday?”
“Is that her name?”
Faith resisted a “Come on.”
He asked, “How would she know how long Anna was kept?”
“She used to be a coroner in some county way down south.”
Will’s eyebrows went up. He slowed to look at another sign. “A coroner? That’s weird.”
He was one to talk. “She was a coroner and a pediatrician.”
Will mumbled as he tried to make out the sign. “I took her for a dancer.”
“Woodland,” Faith read. “A dancer? She’s twenty feet tall.”
“Dancers can be tall.”

Faith --> I like her but gosh she can be mean! Luckily it didn't last. She's starting to trust Will and their relationship is more like siblings.

“I am just an awful, awful person, Sara. I can’t believe I said that to you.”

Sara--> I loved Sara from the moment I first started reading the Grant series. She's awesome and she was great in Undone too. She deserves happiness and I hope she achieves it with Will at some point.

Amanda Wagner--> She's tough on Will and also with Faith but I do think she protects them and cares for them.

Angie--> Not my favorite character. She uses Will and she doesn't care about his feelings. She had a tough past as well but this doesn't give her a free pass to hurt Will constantly.

“Sara studied him. "Is that a Chihuahua behind your back?""No, I'm just happy to see you"Sara gave him a confused smile, and he reluctantly showed her Betty.”