The Thief by J.R. Ward 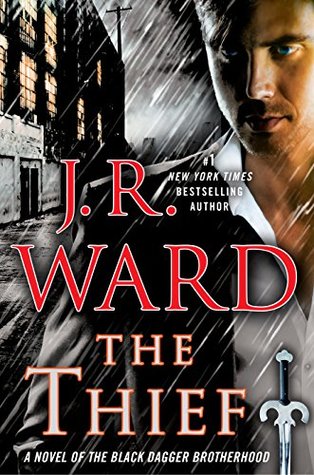 Sola Morte, former cat burglar and safecracker, has given up her old life on the wrong side of the law. On the run from a drug lord’s family, she is lying low far from Caldwell, keeping her nose clean and her beloved grandmother safe. Her heart, though, is back up north, with the only man who has ever gotten through her defenses: Assail, son of Assail, who never meant to fall in love—and certainly not with a human woman. But they have no future, and not just because she doesn’t know he is a vampire, but because he is not about to stop dealing arms to the Black Dagger Brotherhood.

Fate, however, has other plans for them.


When Assail falls into a coma and lingers on the verge of death, his cousins seek out Sola and beg her to give him a reason to live. The last thing she wants is a return to her past, but how can she leave him to die?


As a lethal new enemy of the vampires shows its face, and the Brotherhood needs Assail back on his feet, Sola finds herself not only a target, but a mission-critical force in a war she doesn’t understand. And when Assail’s truth comes out, will she run from the horror... or follow her heart into the arms of the male who loves her more than life itself?

This book was just ok for me.

As per J.R. Ward's latest trend, the novel is centered between two couples. The main couple is Sola and Assail. The second couple is Jane MD and Vishous.

For a few books now, we have known that Sola and Assail belong together. Sola Morte met Assail when she was still a burglar. After a near-death experience, she gave it all up and moved to Miami with her grandmother Vovo. In Miami, she's walking the straight and narrow and she wants nothing to do with anything illegal. She learned her lesson. Then, Assail's cousins come looking for her requesting her help. Sola wants to say no but Vovo won't let her.

Assail has been a drug and a weapon's dealer. Although, recently, he's not doing anything except dying a slow death. He's pretty much comatose. His cocaine habit is finally killing him. His only chance might be for his true love to come to him. Maybe.

Doc Jane is dedicated to her job. She's the BDB's doc and with all the fighting going around, they keep her very busy. Being a workaholic is affecting her marriage and she's not sure how to fix it.

Vishous misses what he had with Jane. He doesn't feel like they are a couple anymore. This train of thought will bring him nothing but heartache.

I was so disappointed in Vishous. Everything I love about him it's pretty much gone. He made a huge mistake at the beginning of The Thief and despite everything else that happened later in it, I just couldn't believe in him anymore. Vishous cares more about Butch than about Jane.  I'm not saying Jane didn't have some issues too but his excuses were pathetic. Yes, Jane needed to distribute her time better. All work and no fun is not the answer but at least she's loyal.

Sola and Assail's relationship was a long time coming. I didn't like that Sola was not going to come back if it wasn't for Vovo.  Now, Assail, I have no complaints. He was a gentleman and a sweetheart.

Things that made an impression:

Sola's grandmother Vovo. I loved her.
Murhder!!
Jo and her soon to be her transformation
Assail's cousins Evale and Ehric
Boo (guess it right from the beginning!)
Lassiter

Things I could've live without:

Vishous wearing certain pants. It had me laughing out loud.

As a huge BDB fan, I'm sad this one felt flat to me. I hope Murhder's book is better.