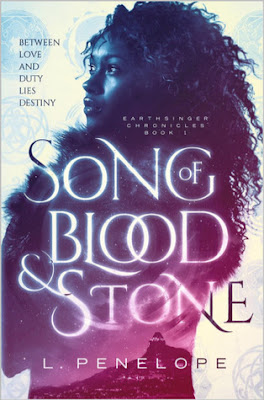 A treacherous, thrilling, epic fantasy about an outcast drawn into a war between two powerful rulers.

Orphaned and alone, Jasminda lives in a land where cold whispers of invasion and war linger on the wind. Jasminda herself is an outcast in her homeland of Elsira, where her gift of Earthsong is feared. When ruthless soldiers seek refuge in her isolated cabin, they bring with them a captive--an injured spy who threatens to steal her heart.

Jack's mission behind enemy lines to prove that the Mantle between Elsira and Lagamiri is about to fall nearly cost him his life, but he is saved by the healing Song of a mysterious young woman. Now he must do whatever it takes to save Elsira and it's people from the True Father and he needs Jasminda's Earthsong to do it. They escape their ruthless captors and together they embark on a perilous journey to save Elsira and to uncover the secrets of The Queen Who Sleeps.

Thrust into a hostile society, Jasminda and Jack must rely on one another even as secrets jeopardize their bond. As an ancient evil gains power, Jasminda races to unlock a mystery that promises salvation.

The fates of two nations hang in the balance as Jasminda and Jack must choose between love and duty to fulfill their destinies and end the war.

I want to start off this review by saying there are some trigger warning for abuse, attempted rape, and racism. One positive note about those subjects was that the author always showed the characters trying to overcome those dark moments, which brought some hope into those scenes. The author really focused on finding happiness no matter your skin color, size, where you were born, or how strong you are. It was empowering to see the characters try to overcome these issues and prove that everyone deserves to be treated the same and get their own happily ever after.The beginning of this book was a little hard to get into because I couldn't quite understand what was happening. The book starts off diving right into this world, so it was a bit difficult for me to understand this new world that was presented. However, as the book went on, the author started to gradually introduce other elements of the world, which made it much easy to understand. By the end of this book, I found this new world to be vivid and imaginative. I am excited for book two, just because I am hoping there will be even more world building! The plot of this book was fast-paced and held my interest the entire time. There was always something interesting going on and the characters were constantly faced with obstacles they needed to overcome. There never seemed to be a super slow moment in the story.Throughout the book, there was strong sexual tension between the two main characters, which I was LIVING for. I definitely felt the physical and emotional chemistry between Jasminda and Jack! I thought they were a wonderful couple. Their romance was sweet, passionate, and full of swoons. However, there were times when it seemed like their romance took over the plot of the story when I would have preferred the story to continue to focus on the action or world-building. Again, that being said, I still enjoyed their romance as a whole and ended the book shipping them VERY hard.Overall, this was an exciting and fast-paced novel full of romance, action, and lovable characters. I would recommend picking this book up if you are looking for a new romantic fantasy novel!3 / 5 Fangs*This ebook was given to me in exchange for an honest review. *