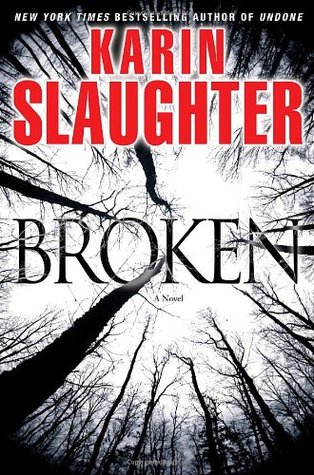 Caught between two complicated and determined women, trying to understand Linton's passionate distrust of Adams, the facts surrounding Chief Tolliver's death, and the complexities of this insular town, Trent will unleash a case filled with explosive secrets--and encounter a thin blue line that could be murderous if crossed.

This series is only getting better!

Sara is back in Grant County. She's visiting her family through the holidays. She has not been back in almost four years.

Shortly after her arrival, the body of a young woman is found in the ice. The man suspected of her death, asks for Sara's help. At first, Sara wants nothing to do with it but she believes something is going on with the police department, especially with Detective Lena Adams. She calls the GBI in.

Will who's on vacation is called by his boss, Amanda Wagner. She wants him to go to Grant County and find out the truth about the murder and to look into what the police department is hiding.

Will knows this is personal for Sara. Yet, his gut instinct is telling him that there's something wrong with the police department. It's not the same as when Chief Tolliver was handling it. Frank is the interim chief and he and his detectives are not welcoming or helpful.

Broken was bittersweet. We see Grant County through Sara and Lena's eyes. Losing Jeffrey has brought nothing good to the town. Both women can't wait to leave it.

Lena has stayed behind because the town represents Jeffrey. Lena is in a relationship. A healthy one which is a shock. I guess she finally learned her lesson. Lena is more mature and less inclined to blame others for her mistakes. She still makes them but at least she's able to point the finger at herself. I was surprised to see her being helpful to Will. I mean she still kept things from him but she was not as bad as 4 years ago.

“He was playing chess and she was sucking at checkers.”

Will is amazing in this one too. He's able to follow the crumbs to find the truth. Once he realizes something is off, Will is too stubborn to let it go.

It was so tough to see Sara back in her hometown. Her devastation and pain were there for anyone to see. Some of the scenes brought tears to my eyes. I continue to root for Sara and Will. I think they can make a great couple.

I found it refreshing to see Sara's sister Tessa in a happy marriage and starting a family. Tessa had it rough too and she has earned some happiness. I love Sara and Tessa's relationship. They are truly siblings.

“Tessa reached out and took her hand. “Can I tell you something?”
“As long as it’s not advice on chasing after a married man.”