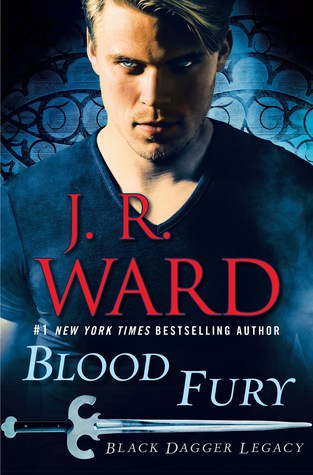 A vampire aristocrat, Peyton is well aware of his duty to his bloodline: mate with an appropriate female of his class and carry on his family’s traditions. And he thought he’d found his perfect match—until she fell in love with someone else. Yet when his split-second decision in a battle with the enemy endangers the life of another trainee, Peyton has to face the idea that his future, and his heart, actually lie with another.

Novo, as a female in the Black Dagger Brotherhood’s training program, feels like she has to prove herself to everybody—and she has no interest in being distracted by falling in love. But when Peyton proves to be so much more than a rich playboy, she is forced to confront the tragedy that has broken her soul and closed her off from love.

Saxton, who has had his heart broken, discovers in himself a deep-seated attraction to Ruhn, a new member of the household. But will the other male explore the connection? Or will he close his mind and his heart to what could be true love . . . and cost Saxton everything?

The first one has to do with Peyton and Novo. Both are part of the BDB training program. Peyton is part of the aristocracy, Novo is not. Peyton thought he was in love with someone else until he realizes he's not and Novo is the one for him.

Novo is a great warrior. She's a fighter. She also takes no BS from no one. She's fast and lethal but she's hiding a huge secret from her past that changed her. Peyton can be the distraction she needs but she won't let her heart be broken again.

The second couple is Ruhn and Saxton. We know Saxton. He's Wrath's solicitor. He's a good guy who got his heart broken by Blay. It's hard for him to see Blay every day and realize there's no chance for them. Then, there's Ruhn. He's Bitty uncle. He's a working man from a poor family. He's now living in the mansion but he can't get used to it. When Wrath's give him the job to accompany and protect Saxton on his next mission outside the office, he's glad to do it. What Ruhn was not expecting was to feel attracted to Saxton.

I will say that I wasn't crazy about Peyton. His entitled rich boy behavior bothered me but by the end of Blood Fury, he had changed. So yay for him! On the other hand, Novo was already great in the past books. She's a kick-butt heroine but In Blood Fury, we see more of her softer side.

Ruhn and Saxton made a good couple. They were complete opposites but together they made sense. His Ying to his Yang. I'm so happy Saxton is not alone anymore.