Beyond Reach by Karin Slaughter 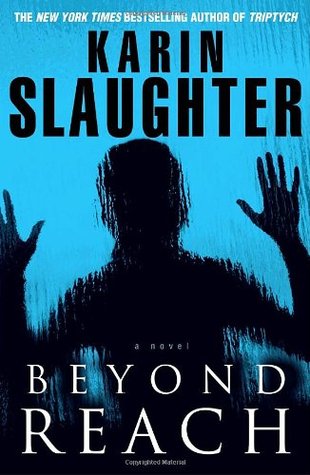 Sara Linton--resident medical examiner/pediatrician in Grant County, Georgia, --has plenty of hardship to deal with, including defending herself in a heartbreaking malpractice suit. So when her husband, Police chief Jeffery Tolliver, learns that his friend and coworker detective Lena Adams has been arrested for murder and needs Sara's help, she is not sure she can handle the pressure of it all. But soon Sara and Jeffery are sitting through evidence, peeling back the layers of a mystery that grows darker by the day--until an intricate web of betrayal and vengeance begins to unravel. And suddenly the lives of Sara, Lena, and Jeffery are hanging by the slenderest of threads.

What a horrible ending to a series!

Not sure what the author was thinking with this one.

Detective Lena Adams goes to visit her uncle Hank during her day off. To her surprise, she finds him high as a kite. When did Hank get hooked on drugs again?

Next thing we know, Lena is in custody after a car is burned with a body in it and Lena is found close to it. Chief Jeffrey Tolliver comes running to help his detective and Sara Linton is tagging along. Jeffrey and Sara have recently remarried and are in the process of adopting a baby. Sara's practice as a pediatrician has closed after she is named in a lawsuit.

When Jeffrey and Sara arrive in town, they discover death, drugs, and skinheads all over the place. Jeffrey wonders if Ethan Green is involved in any of it.

Beyond Reach was a letdown I felt the author was in need of a Wow moment and her ending was one way to achieve it. I wasn't satisfied. After reading all the Grant books and investing in these characters, the outcome failed to deliver.

Surprisingly, this is the first book where I didn't hate Lena. Don't get me wrong, she's obnoxious and she's still making plenty of wrong decisions and in a very real way, she has to do with how wrong things ended but I didn't despise her like I did in prior books.

As always, Sara is the best thing the Grant series has. I wonder what's in store for her.