Out of Left Field by Kris Hui Lee 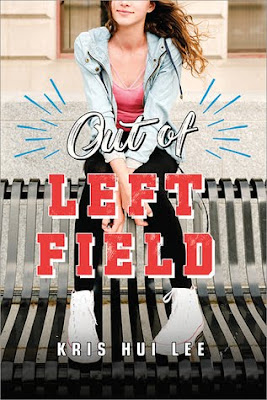 There’s no playing it safe in love or baseball in this sparkling debut, perfect for fans of Morgan Matson and Kasie West.Marnie has never had a hard time fitting in with the guys. It would take a lot more than their goofy antics to keep her from joining them at the neighborhood sandlot to do what she loves best: play ball.An added perk of hanging out at the sandlot? Spending time with Cody Kinski, their high school’s star pitcher and Marnie’s best friend. Sure, he can be stubborn and annoying. He also knows how to make her laugh and respects her skills on the mound. And when he gets nailed in the arm by a bone-fracturing pitch, Marnie becomes the team’s best chance at making it to the playoffs. Except no one told the guys they’re supposed to be on her side. With her own team against her, Marnie begins questioning her abilities. And when fate throws her a curveball, can she play without losing the game, Cody, and her belief in herself?

Out of Left Field was a charming, lovable, and fun contemporary romance novel!The main character, Marnie, was a strong and determined girl! There were so many times when people tried to tear her down, and she always stood up for herself. I loved how fierce she was and how she continued to show she was just as valuable and useful as any guy! Marnie's best friend, Sara, was such a supportive friend to Marnie. Their friendship was so positive and sweet, which warmed my heart. I was so happy that there was a strong female friendship represent throughout this book. It was refreshing to see two girls build each other up instead drag each other down. Cody, the romantic interest, was another supportive and kind character. He was someone that always believed in Marnie and wanted to see her succeed. The romantic relationship between Cody and Marnie developed at a believable pace and they had sweet moments. However, I wish Cody would have been more present in the book. I felt like their relationship had a lot of "telling" instead of "showing". It was constantly discussed how much they cared for each other and how strong their relationship was, but I was hoping to actually see more of that. I still thought they had a cute romance, but I think it would have been even more impactful if they had more scenes that showed their relationship. Overall, I found this to be a quick and romantic read about high school, baseball, and relationships. If you are looking for a summer romance novel, I would recommend checking this book out! 3 / 5 Fangs*This ebook was given to me in exchange for an honest review. *