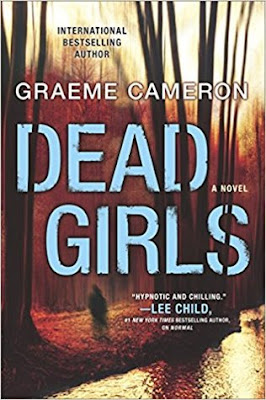 I may not remember everything, but I know he won’t hurt anyone else.

It’s been two months since a serial killer brutally attacked police detective Alisha Green and left her for dead. Two months since she could effortlessly recall simple things, since her mind felt remotely sound. The nameless killer thinks he knows her, thinks she’s just another dead girl among many. Ali Green plans to show him he’s dead wrong about that.

Ali has two enemies now: the dangerous man she’s hunting and her own failing memory. As explosive new evidence comes to light and conflicting accounts from a witness and a surviving victim threaten both her investigation and her credibility, she begins to question what is and isn’t real. And now Ali has no choice but to remember the past…before it buries her.

A hypnotically gripping thriller that proves internationally bestselling author Graeme Cameron is one of the most unique voices in contemporary fiction today.

I had heard great things about Normal and I couldn't wait to read Dead Girls. Regrettably, I had problems with Dead Girls from the beginning. If I could use one word to describe it, it would be disorganized. To this reader, the narrative felt all over the place. We jump from one scene to the next without cohesive understanding of the actions by either the main protagonist or the villain in this story.

So what was Dead Girls about?

A suspected serial killer is on the lose. Two months ago, Sargeant Alisha Green was attacked by him and left for dead. Now, she is called back to work early but Alisha has failed to mention to her partner Kevin and superior Jenny that since her attack, she can't remember much and creating new memories is difficult too. She keeps a notebook to help herself remember.

The serial killer attacks many and as more cops keep dying, Alisah will have to find a way to remember what he looks like when the evidence starts pointing in a different direction.

Like I said earlier, it was hard to remain invested in this novel. Many passages and scenes were confusing. I would say that the last third was the most interesting one.

A complimentary copy was provided by Park Row via Netgalley in exchange for an honest review.