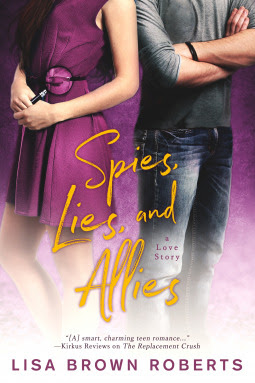 Summers are supposed to be fun, right? Not mine. I’ve got a job at my dad’s company, which is sponsoring a college scholarship competition. I just found out that, in addition to my job assisting the competing interns, I’m supposed to vote for the winner. Totally not what I signed up for.My boss is running the competition like it’s an episode of Survivor. Then there’s Carlos, who is, well, very distracting––in a good way. But I can’t even think about him like that because fraternizing on the job means instant disqualification for the intern involved.As if that’s not enough, an anonymous informant with insider intel is trying to sabotage my dad’s company on social media...and I’m afraid it's working.Much as I’d love to quit, I can’t. Kristoffs Never Quit is our family motto. I just hope there’s more than one survivor by the end of this summer.

Spies, Lies, and Allies is the perfect summer romance book! This book was fast-paced, witty, romantic, and full of Star Wars references! My nerdy little heart was filled with joy!

There were so many lovable characters in this book, which is what made it such a fun book to read. Each character was unique and memorable in their own way. All of the characters were thrown together in the workplace, which meant their friendship was off to a rocky start. However, it was so heart-warming to watch the characters all become friends and rely on each other as the book progressed. This book had such a heavy focus on friendships, which was so nice to have in a contemporary story.

I also thought the romance was SO FREAKING CUTE in this book! The author did a great job at creating a romance that developed at a natural pace. There was an initial attraction between the two characters, but I appreciated that the author focused on making them friends before developing their romantic relationship. The romance was full of sweet and swoony moments that made feel like I was eating cotton candy. It was everything I wanted in a cute summer romance story!

I was pleasantly surprised with how this book actually addressed real issues like sexism in the workplace and judging people based on their looks. I appreciated how the characters noticed sexism and immediately shut it down! HOORAY FOR EQUAL RIGHTS! All of the characters also learned how important it is to not judge people before you get to know them. Some of the characters did judge each other, but they later learned how important it is to be kind to everyone and to try to get to know people before writing them off.

Overall, Spies, Lies, and Allies was a charming and delightful book! If you are in the mood for a quick read full of nerdy references, adorable romances, strong family relationships, and well-developed friendships, then I would definitely recommend this cute book!