The Fix by David Baldacci 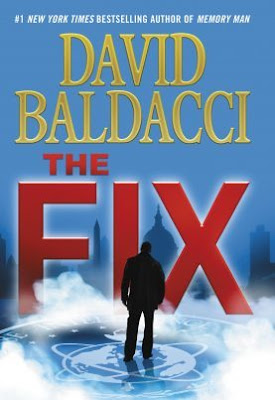 Amos Decker witnesses a murder just outside FBI headquarters. A man shoots a woman execution-style on a crowded sidewalk, then turns the gun on himself.

Even with Decker's extraordinary powers of observation and deduction, the killing is baffling. Decker and his team can find absolutely no connection between the shooter - a family man with a successful consulting business - and his victim, a schoolteacher. Nor is there a hint of any possible motive for the attack.

Enter Harper Brown. An agent of the Defense Intelligence Agency, she orders Decker to back off the case. The murder is part of an open DIA investigation, one so classified that Decker and his team aren't cleared for it.

But they learn that the DIA believes solving the murder is now a matter of urgent national security. Critical information may have been leaked to a hostile government - or, worse, an international terrorist group - and an attack may be imminent.

Decker's never been one to follow the rules, especially with the stakes so high. Forced into an uneasy alliance with Agent Brown, Decker remains laser-focused on only one goal: solving the case before it's too late.

I loved every minute of it!

Since the first book, Amos Decker has finally grown on me. He can be insensitive and brusk at times but he's determined. Determined to find the truth. His perfect memory can be a cross to bear but it also helps him find what he's looking for.

Their new case happened literally in front of Amos' eyes. He was walking toward the Hoover building when he witnesses a man shooting a woman in execution style. Before Amos can do much, the man turns the gun on himself leaving more questions than answers.

The man is later identified as Walter Dabney, a government contractor who used to work with the NSA. The woman is a substitute school teacher by the name of Anne Berkshire. Amos and his team, (Alex Jamison, Special Agent Ross Bogart, and Todd Milligan) will be in charge of finding the pieces missing from the investigation.

There are many questions which need an answer:

Why did Walter murder the woman? Did they know each other? Was it a case of the wrong person at the wrong time? Or is there something more sinister going on?

Soon, when DIA agent, Harper Brown enters the picture, she suggests it could be the latter. At first, Harper wants them to back off the investigation but between a stubborn Decker and without any new leads, she's forced to do a joint investigation with his team.

As always, Amos' synesthesia and hyperthymesia are a huge help to the case. Amos is able to piece together most of the clues with the help of the team and Harper.

The Fix has plenty of suspense and thrilling moments. I do believe this one is my favorite in the series. I love that David Baldacci influxes this book with just enough funny moments to give it some levity.

Amos has evolved as a character. He will never forget what happened to his family but he's starting to realize when his social cues are not the best. He has developed new friendships and he's able to be part of the team. The addition of Harper Brown as the new team member was a good play by Baldacci.