The Blackbird Season by Kate Moretti 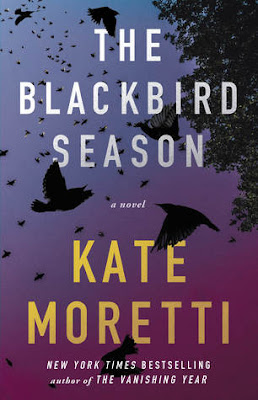 “Where did they come from? Why did they fall? The question would be asked a thousand times…

Until, of course, more important question arose, at which time everyone promptly forgot that a thousand birds fell on the town of Mount Oanoke at all.”

In a quiet Pennsylvania town, a thousand dead starlings fall onto a high school baseball field, unleashing a horrifying and unexpected chain of events that will rock the close-knit community.

Beloved baseball coach and teacher Nate Winters and his wife, Alicia, are well respected throughout town. That is, until one of the many reporters investigating the bizarre bird phenomenon catches Nate embracing a wayward student, Lucia Hamm, in front of a sleazy motel. Lucia soon buoys the scandal by claiming that she and Nate are engaged in an affair, throwing the town into an uproar…and leaving Alicia to wonder if her husband has a second life.

And when Lucia suddenly disappears, the police only to have one suspect: Nate.

Nate’s coworker and sole supporter, Bridget Harris, Lucia’s creative writing teacher, is determined to prove his innocence. She has Lucia’s class journal, and while some of the entries appear particularly damning to Nate’s case, others just don’t add up. Bridget knows the key to Nate’s exoneration and the truth of Lucia’s disappearance lie within the walls of the school and in the pages of that journal.

Told from the alternating points of view of Alicia, Nate, Lucia, and Bridget, The Blackbird Season is a haunting, psychologically nuanced suspense, filled with Kate Moretti’s signature “chillingly satisfying”


PRAISE FOR THE BLACKBIRD SEASON:

“Crime fiction adores girls in trouble. Moretti's latest nail-biter (The Vanishing Year, 2016, etc.) is no exception, but it is exceptional… Though Moretti's emotionally astute tale can be heart-rending, readers won't be able to look away. As slow, creeping dread sets in, so does the inevitability of the terrible situation the town finds itself in, offering a deliciously sinister glimpse into the duplicity of small-town lives and the ease with which people turn on each other when tragedy comes calling. Moretti's tale of jealousy and obsession is nothing less than dark magic. Witchery indeed.”
– Kirkus Reviews (STARRED Review)

“A powerful story about a missing girl and an accused suspect that takes a haunting look into the characters and relationships you think you know.  The Blackbird Season explores the fine line between guilt and innocence, truth and perception, the moments that break people apart—and those that bring them together. Riveting and insightful, this is a book that lingers long after you turn the final page.”

“Kate Moretti’s insightful, starkly human mystery about a girl they call 'witch' has that sit-down, gotta-cry eloquence readers long for. Mean girl alliances and small town loyalties collapse in unison on the day the blackbirds fall. This story will hold you tight to its pages well past your bedtime. The Blackbird Season is Moretti’s best yet.”

“The Blackbird Season pulls off a very difficult thing: it's nail-biting and thought-provoking all at once. It's a rare that a book can make you turn pages like your life depends on it, but also give you food for thought because the characters are so perfectly drawn. A stunning achievement from an extremely talented writer.”
– Gilly Macmillan, New York Times bestselling author of What She Knew

“Moretti spins a tale of suspicion, deceit, and dreams that die as suddenly as a flock of starlings falling from the sky. A thrilling morality tale of the highest order, The Blackbird Season will make you question the lines between right and wrong, victim and criminal, and the unknowable intentions that form our innocence and guilt.”
– Mindy Mejia, author of Everything You Want Me to Be

“Moretti begins The Blackbird Season with a sinister premise — a cloud of birds fall from the sky on the same day a teenage girl people call ‘the witch’ goes missing. A spellbinding tale of long-held secrets and small-town scandal, The Blackbird Season is one of those stories that sneaks up on you, each chapter building steadily to an ending that will haunt you long after you turn the last page.”
– Kimberly Belle, bestselling author of The Marriage Lie

“The characters are authentically flawed and believable, and part of the mystery is the unfolding of their motivations…The Blackbird Season is about how people—teens and adults alike—get lost and disconnected. All that, plus a suspenseful mystery—what more can you ask for?”
– Holly Brown, author of Don't Try to Find Me

“When a troubled teenaged girl goes missing in The Blackbird Season, the town in which she lives is ripped apart by suspicion. As disturbing secrets bubble to the surface, no one is safe. Kate Moretti’s trademark vivid characterizations, surprising storyline, and heart-stopping suspense kept me eagerly turning pages long into the night.”
– Carla Buckley, author of The Good Goodbye
“The Blackbird Season is more than a haunting mystery; it’s an intense exploration of a family in crisis and a community rocked by scandal. How well can you truly know the ones you love? How far can you trust them? I couldn’t stop reading until I knew the whole and harrowing truth.”
– Laura McHugh, award-winning author of The Weight of Blood and Arrowood

The characters from The Blackbird Season were dysfunctional but interesting. However, none of the characters pulled me into their lives and made me root for them. I guess if I had to choose one, Bridget would be the saving grace.

The Blackbird Season starts with the fall of a thousand starlings on the high-school baseball field. The little town of Mt. Oanake, P.A. is the setting for this grim occurrence. This coincides with the shocking news that a beloved teacher was having an affair with a student.

Nate Winters is married. His wife Alicia is a stay at home mom who takes care of their autistic child. Nate is the teacher in question. He's known for befriending his students and following them on social media. He takes particular interest in Lucia Hamm, a student who comes from a broken family.

Bridget Harris is Lucia's teacher. She's best friends with Nate and she is the only one who thinks he's not guilty. Bridget, a recent widow, knows she can't let it go despite not liking Lucia very much.

Lucia Hamm comes from a broken home. Her father is gone and her brother is an abusive junkie. Her only outlet is writing her thoughts and reading tarot cards. Her situation at school is not any better. She's bullied and called a witch.

It was hard to like Nate. He crossed so many lines a teacher shouldn't. He made mistake after mistake and when Lucia disappears, he didn't help himself by lying.

Lucia had a tough life but she contributed to her own school drama. There is one situation where she had all my sympathy but for the most part, I didn't like her.

My biggest problem was with Alicia. She was so frustrated with her own life that she never gave Nate the benefit of the doubt. She was first to write him off. Shameful, really.

Like I said earlier, Bridget was the saving grace. She was nice and was the only one looking for the truth.

I would categorize The Blackbird Season as a mystery more than a psychological thriller.


A complimentary copy was provided by Atria via Netgalley in exchange for an honest review. 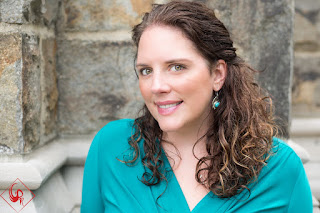 Kate Moretti is the New York Times bestselling author of The Vanishing Year, Thought I Knew You, and Binds That Tie. She lives in eastern Pennsylvania with her husband and kids. Find out more at katemoretti.com.