A Semi-Definitive List of Worst Nightmares
by Krystal Sutherland 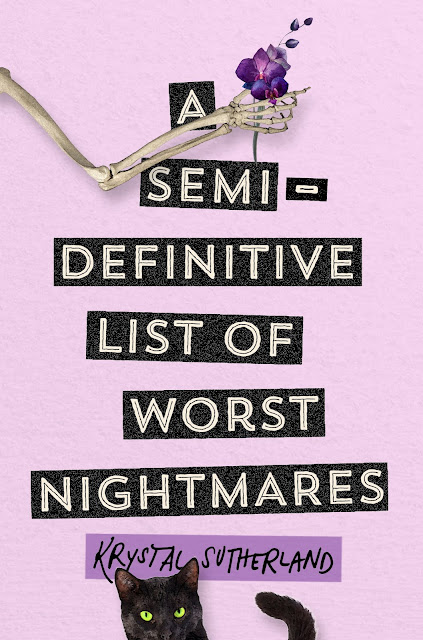 Ever since Esther Solar's grandfather was cursed by Death, everyone in her family has been doomed to suffer one great fear in their lifetime. Esther's father is agoraphobic and hasn't left the basement in six years, her twin brother can t be in the dark without a light on, and her mother is terrified of bad luck.

The Solars are consumed by their fears and, according to the legend of the curse, destined to die from them.


Esther doesn't know what her great fear is yet (nor does she want to), a feat achieved by avoiding pretty much everything. Elevators, small spaces, and crowds are all off-limits. So are haircuts, spiders, dolls, mirrors and three dozen other phobias she keeps a record of in her semi-definitive list of worst nightmares.


Then Esther is pickpocketed by Jonah Smallwood, an old elementary school classmate. Along with her phone, money and a fruit roll-up she d been saving, Jonah also steals her list of fears. Despite the theft, Esther and Jonah become friends, and he sets a challenge for them: in an effort to break the curse that has crippled her family, they will meet every Sunday of senior year to work their way through the list, facing one terrifying fear at a time, including one that Esther hadn't counted on: love.

WOW! I was blown away with how much I adored this novel. From the first page, I was sucked into this novel and completely mesmerized. I have truly never read a book quite like this one and I don't think I will ever forget this book. This book had so much heart, humor, adventure, and romance in it. However, there were also moments of despair and dread. The author artfully weaved all of those elements into one enchanting story.The idea of having a list of nightmares and trying to overcome all of those fears really intrigued me. I thought it was so unique and completely addictive. I found myself cowering right alongside the characters while they were tackling each fear and I felt that rush of adrenaline once they completed the task. The list of nightmares sent the characters on such a fun and extraordinary journey, and I loved every moment of it.

The characters in this book were all so unique and wonderful in their own ways. Esther, Jonah, and Eugene were characters that grew to love and care for deeply. I truly adored how different they were from the "norm". They all went on such emotional journeys throughout this story and my heart truly ached for me. This author made me care for the characters like they were my friends in real life.

Hephzibah was another character that I liked a lot, but I wish there would have been more of. She was the best friend of Esther and Eugene, and I loved those friendships, but I wish I would have seen a little more of it.


I just want to touch on how much of an absolute DELIGHT Jonah was. Jonah was a ray of sunshine that warmed my heart and soul. He did some sketchy things in the beginning, but it was easy to forgive those things once I got to know him more. Jonah was such a kind, thoughtful, resourceful, charming, and easy-going character. I loved how he was up for any and all adventures. JONAH WAS MAGNIFICENT AND EXTRAORDINARY.

The romance in this book was swoony and completely adorable. I shipped the couple from their very first interaction and I never regretted it. The romance was well-paced and so FREAKING CUTE. I loved that the romance never took over the plot or felt too heavy. The author excluded the romance PERFECTLY. I WANT MORE OF IT, PLEASE?

Going into this book, I was not expecting the emotional punch it was going to have. A Semi-Definitive List of Worst Nightmares touched on a lot of dark topics including mental health and abuse. Mental health was a large element of this book and I thought the author handled it in an honest and healthy way. There were multiple types of anxieties, fears, depressions, and other health concerns that were discussed in this book. It was nice to see mental health discussed so openly and freely in a YA book.

Overall, this book was an addictive and memorable story. This was a book about fighting your demons, loving yourself, and so much more. A Semi-Definitive List of Worst Nightmares is a book I would recommend to everyone and anyone.

*This book was given to me in exchange for an honest review. *

Enter for a chance to be one (1) of three (3) winners to receive a hardcover copy of A Semi-Definitive List of Worst Nightmares by Krystal Sutherland. (ARV: $17.99 each).
NO PURCHASE NECESSARY. Enter between 12:00 AM Eastern Time on September 4, 2017 and 12:00 AM on September 25, 2017.  Open to residents of the fifty United States and the District of Columbia who are 13 and older. Winners will be selected at random on or about September 27, 2017. Odds of winning depend on number of eligible entries received. Void where prohibited or restricted by law. 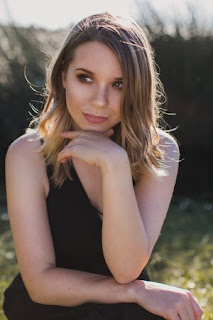 I am Krystal Sutherland, writer of books. Or, more specifically, I am the writer of one lonely book, OUR CHEMICAL HEARTS, which is being published in September 2016 by Penguin in the US and ANZ, and Hot Key in the UK.


I was born and raised in Townsville, in the far north of Australia. Since escaping to Sydney in 2011, I've also lived in Amsterdam, which was awesome but cold, and Hong Kong, where I currently reside (though I speak neither Dutch nor Cantonese).


Growing up, I never dreamed of being a writer. I wanted to be a) a florist, then b) a volcanologist, then c) an actress. It wasn't until shortly after my 18th birthday that I sat down to write my first (terrible) novel.


OUR CHEMICAL HEARTS, thankfully, is slightly better than that hot mess. Nonetheless, I am notoriously bad at explaining what it's about, except to say that it involves the terribly tragic and awful experience of falling in love for the first time.


I have no pets and no children, but in Amsterdam I owned a bicycle called Kim Kardashian. It was somewhat difficult to get along with. I was fond of it regardless.